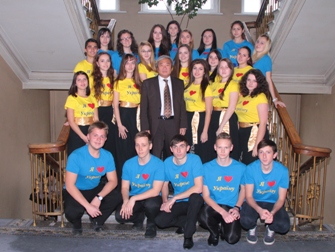 November 17 in Zaporizhia city administration was held a traditional celebration of the International Srudents' Day and awarding the best students of city. The hosts of the event were students of ZNU, studio presenters, participants of "STEM-MS" of Cultural Center of ZNU - Denys Bilokon and Kateryna Domina.

The event started with Anthem of Ukraine and students' anthem "Gaudeamus" performed by the choir vocal studio "Kantylena". 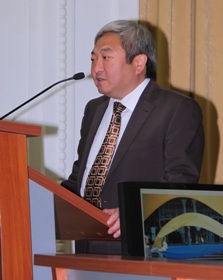 With words of congratulations to the representatives of the students turned Zaporizhzhya city mayor Oleksandr Sin. He thanked the students for their active life position and wished them inspiration and a responsible attitude towards studying, as students - the future of our country.
To congratulate students on the occasion attended as CEOs of Zaporizhzhya universities and representatives of student government universities of city. Among the guests were also members of the "Students - for local authorities"

, are trained in the standing committees of the City Council. The four students who participated in this project were awarded certificates of Zaporizhzhya City Council, among them was a student of the Faculty of Social Pedagogics and Psychology Oksana Piatnyk (Commission for the Environmental Issues).
And, of course, in the event, awarding the best representatives of Student Government of the city. Honorary diplomas of Executive Committee of Zaporizhzhya City Council have been awarded 27 students of Zaporizhzhya for active civic activities aimed at developing the student movement in the city.
It should be noted that the scenario of the event is traditionally prepared by the Cultural Center of ZNU.

INTERNATIONAL DISTANT MEETING ON THE COVID-19 PANDEMIC
In the framework of the cooperation agreement between ZNU and Association of women-lawyers of Ukraine «Law firm», students of the Faculty of Law participated in webinar
The Faculty of History invites to study under the new educational program "History and Politics"
The first graduation of bachelors of the Engineering Institute of ZNU took place
Student of ZNU Taras Malchenko became the bronze medalist of the international tournament in Olympic taekwondo
© 2018 ЗНУ Запорізький національний університет, 69600,
м. Запоріжжя, вул. Жуковського, 66,
Відділ діловодства тел./факс +38 (061) 228-75-08
Приймальна комісія тел. (061) 228-75-38 та (061) 289-12-68
Офіційна пошта