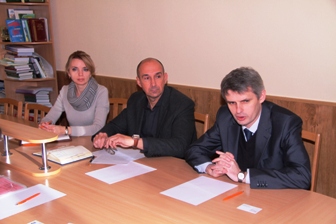 December 2 to Zaporizhzhya National University on an official visit came director of the Association of Francophone Universities (Agence universitaire de la Francophonie - AUF) in Moldova Roman Kwiatkowski to review the prospect of our university's accession.

Association of Francophone Universities - is one of the largest international research community, which brings together universities around the world to support research and development of education in the French language and culture.
Roman Kwiatkowski said that joining Association of Francophone Universities, for ZNU will open a number of possibilities: grants for training and research in various countries education in magistracy abroad, obtaining a Master's diploma of 2nd degree, the exchange of scientific achievements, development of joint French-speaking educational programs and projects in support of the organization and holding of conferences, workshops, festivals, etc.
After the official meeting with the leadership, honored guest walked ZNU campus and visited the Faculty of Foreign Languages.