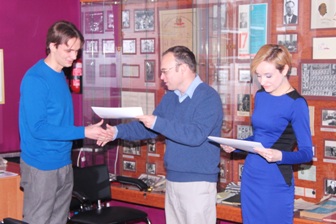 On December 4, the best graduate students of the Law Faculty were awarded diplomas for the successful completion of "English Legal Skills and Introduction to Legal English Practice" course conducted at Zaporizhia National University by the honorary research fellow of the Liverpool Law School Kiron Reid. The course was supported by the university administration and ZNU Foreign Languages Center.

The students were congratulated and awarded their diplomas by the guest of the university and course instructor Kiron Reid, the Vice-Rector of educational development Olexandr Gura, the Dean of the Law Faculty Tetiana Kolomoiets, deputy dean Victor Sabadash, and ZNU Foreign Languages Center director Natalia Kostenko. In his address to the students Olexandr Gura stressed that conducting the course at ZNU was a remarkable event and expressed hope that in the future ZNU alumni would visit other countries with their own lectures. He also suggested that the professor from Liverpool learn Ukrainian and promised to award him a proper diploma. Kiron Reid congratulated the students as well. He said he had truly enjoyed communicating with the ZNU representatives. The guest stated it had been a fantastic experience and urged them to keep in touch with him. Tetiana Kolomoiets informed of the further plans of the Law Faculty mentioning that when Kiron Reid would visit ZNU once again in spring, the first branch of the British Law Centre in Ukraine would be founded at our university. The Dean emphasized, “That is why there are so many things to do considering both theoretical preparation and improving the command of English”. After congratulations Kiron Reid awarded diplomas to the course students – Vlad Bandrovskyi, Anton Barlit, Olha Popova, Polina Zozulia, Serhii Kornieiev, Mykhailo Shvaikovskyi, Olha Fesenko, Hanna Ditshko, Daria Krylova, Ksenia Krasnova, Anna Yermolaieva, and Olesia Krasnokutska. It should be mentioned that the professors of the Law Faculty (Tetiana Kolomoiets, Victor Sabadash, Mykhailo Vykhliaiev, Anna Sharaia) as well as the professors of English (Anzhela Volkova, Svitlana Vavilina, Olha Domnitsh, Olexandra Prykhodko) learned from the foreign guest.