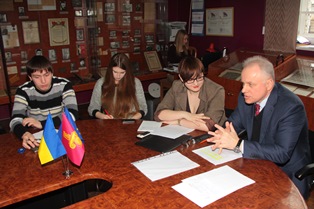 December 19 ZNU Student Council met with representatives of the administration, during which discussed issues such as the combination of Mykola Frolov the Rector work and people's deputy of Ukraine work, changes in the assessment of student university budget transparency mechanisms charges of scholarships in the new law "On Higher education".

It should be noted that the issues discussed during the meeting, representatives of Student Council collected in social networks among their colleagues for a few days. This means that members of the administration were able to learn about all the problems that concern students of ZNU.
Asked in university management and public discussion of knowledge assessment system to be introduced in of ZNU on September 1, 2015. Mykola Frolov said that in April next year will held a joint meeting on the educational process, in which can take part and come up with a proposal of any student of ZNU. By the time, students are able to participate in discussions and preparation of projects during meetings of the administration, Academic Council of the labor staff and conferences.
As for transparency of financial activities of the university (in some universities there are institutes of budget discussion), the Rector said that such a system in Zaporizhzhya National University have introduced for a long time. The financial report is published annually in the meetings of the Scientific Council of the labor staff, conferences and soon will be available on the website of ZNU.
On the issue of eliminating academic scholarships from the new academic year, which is actively discussed in social networks, the Rector of ZNU reported that the item is not included in the project budget of our country. Mykola Frolov convinced that talk on cancellation of scholarships used to instigate society and that this issue is contrary to the Law of Ukraine "On Higher Education". But the mechanisms of scholarships charges under the new law participants agreed to talk in January.
Discussed at the meeting an issue of culture communication, storage of the university property of Scientific Library of ZNU. In particular, the students made a proposal to establish in the hall of periodicals a photocopying. In turn, the university administration offered students to join the process of library database digitization.

“Foreign Language Teacher Training Capacity Development as a Way to Ukraine’s Multilingual Education and European Integration” Erasmus + КА2 programme: Foreign Partners in ZNU
Students of the Faculty of History met with the representatives of the EU Delegation to Ukraine
Prospects of international internship for students of the Faculty of Economics in China
Klympush-Tsintsadze Ivanna, Vice Prime Minister of Ukraine for European and Euro-Atlantic Integration met with representatives of ZNU
The project of the formation of academic integrity in school was presented in Zaporizhzhia National University
© 2018 ЗНУ Запорізький національний університет, 69600,
м. Запоріжжя, вул. Жуковського, 66,
Відділ діловодства тел./факс +38 (061) 228-75-08
Приймальна комісія тел. (061) 228-75-38 та (061) 289-12-68
Офіційна пошта