ZNU students participated in the flash mob "Chain of Unity" 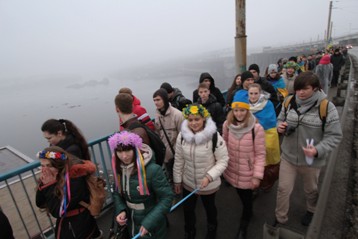 January 22, on the Day of Unity of Ukraine, Zaporizhzhya National University students took part in patriotic flash mob "Chain of Unity". During the event, the youth of the city created a human chain on the Dnieper dam, symbolically uniting in this way banks of the Dnieper. Despite the gloomy weather, the mood was elevated participants. In flashmob they took a patriotic symbols - flags, wreaths, yellow and blue ribbons.

This patriotic event continued on the Alley of Motherland Defenders in the park of Metallurgists, where students gathered yellow-blue puzzle card of Ukraine, 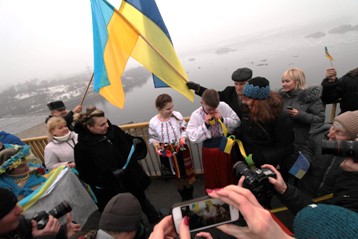 and ZNU student Yuliia Danyliuk performed the song "Native Land". Continued the Day of Unification celebration performance poem "Love Ukraine" of Volodymyr Sosyura and finally everyone sang anthem of Ukraine.
The organizer of the action was the Department for Youth and Sports of Zaporizhzhya regional state administration, and students of Zaporizhzhya National University have become its active participants.