At the Philological Faculty demonstrated musicality of Shevchenko works 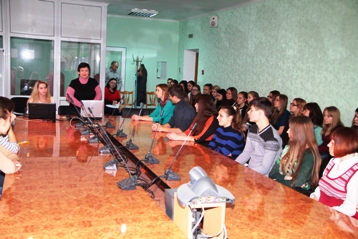 Within Shevchenko's event 2015 at the Philological Faculty passed a literary evening "Musicality of Taras Shevchenko works". Under the guidance of Associate Professor of the Department of Ukrainian Language Nataliia Zubets prepared it is prepared by freshmen of the Faculty of Philology of ZNU.

In their speeches, students of the Faculty of Philology tried to prove the idea that although Taras Shevchenko known mainly for its poetic and artistic creativity, but, no doubt, had musical talent. Today him is fairly called one of the world's musical poets. It is no coincidence his first poetry collection he called the name of folk singer and poet himself also became known poet, which reflects his spiritual and moral authority among the people. The fate indeed called him to become a Ukrainian Homer.
Students are also reminded that researchers account for more than two thousand songs in the words of the great poet. In general, composers around the world wrote music for poems of Shevchenko. Mykola Lysenko wrote it more than 100 of his works. Kyrylo Stetsenko, Yakiv Stepovyi, Stanislav Lyudkevych and others are inspired by the poetry of Shevchenko continued to write music to his poetry.
Of course, a lot of reflections has been devoted glorious youth "Testament" the music which created until 42 composers. Introduced his students and ZNU on the evening, and in several languages. Young people also showed other talents.
Continue Shevchenko's event-2015 this week on Shevchenko's readings.