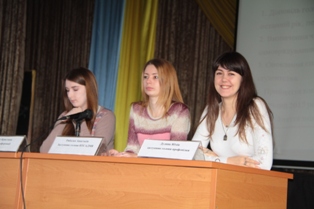 March 19, at Zaporizhzhya National University held next working conference for students. Its participants - delegates of students from all faculties of our university - considered a number of important questions related with student's self-government in Higher Educational Institution. They listened the report by the head of Student Council of ZNU Olha Lebedieva according to the results of student's active of the last year, voted for the proposed quota students of autonomous bodies affiliated of the Scientific Council and updated the list of student-delegates at the Conference of staff members. They also approved cost estimate for 2015 year and decree the changes to the provisions "About student's self-government of ZNU". 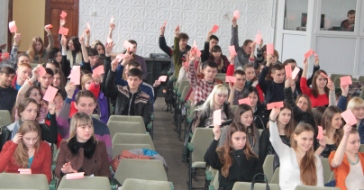 During the conference, the participants voted for the proposed quota students of public authorities affiliated of the Scientific Council: Olha Lebedieva, the head of the Student Council of the Faculty of Foreign Languages Anastasiia Brus, the head of the Student Council of the Faculty of Management Tetiana Khokhlina. They also approved an updated list of student’s delegates to the Conference of staff members of ZNU. These were heads of student councils: Tetiana Khokhlina (Faculty of Management), Illia Maksymov (College of Economics and Law), Andrii Luchyshyn (Faculty of Philology), Anastasiia Brus (Faculty of Foreign Languages), Yelyzaveta Verba (Faculty of Biology), Pavlo Kanevskyi (student camp tender №2).
Another important item on the orders of the day was the approval of the Students Council сost estimates for 2015. At this time the budget of student self-government of our university will be 271 976 hryvnias. It made up for taking into account experience of students active for the previous two years, so this time the payments is not planned to allocate between faculties, but for  the areas of work: scientific, cultural-mass, sports, volunteer, etc.
The participants also discussed several current questions connected with activities of students self-government of ZNU. At the end of the event Olha Lebedieva thanked to all those present for their participation in the conference and an important concern for the common cause.

The project of students of ZNU is a participant of the program “Public Budget” and needs your support
Representatives of ZNU took part in the International Conference on the quality of higher education
Associate professors of the Faculty of Philology took part in an international conference dedicated to the works of the famous artist Viktor Petrov
Representatives of ZNU took part in the Ukrainian-Germane conference dedicated to climate adaptation
Scholars of the Faculty of Economics of ZNU and Engineering Institute took part in the International Lithuanian Conference
© 2018 ЗНУ Запорізький національний університет, 69600,
м. Запоріжжя, вул. Жуковського, 66,
Відділ діловодства тел./факс +38 (061) 228-75-08
Приймальна комісія тел. +380661803608, +380953068022, +380973559513
Офіційна пошта