Student's of ZNU took part in the Forum for gifted youth 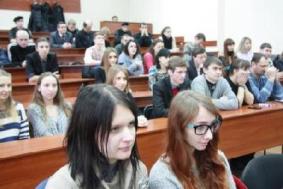 In Zaporizhzhya held the 1st Forum for gifted youth, in which took part 300 students fromall Higher Educational Institutions of our city, who receive a scholarship of the City Council. Zaporizhzhya National University was represented by students awarded these scholarship payments for outstanding successes in study and active participation in the scientific, social and mass culture life of Zaporizhzhya youth.

In the Forum for gifted youth, students talked about the state of scientific work, student government, patriotic upbringing and employment of graduates in their educational institutions and expressed their views about the prospects for future development. Thus for its activity were noted representatives of Zaporizhzhya National University.
During the summarizing in the Forum for gifted youth and approval of its resolution its organizers and participants discussed a number of important questions. All agreed with the proposal to make such an event in our city annually in order to a talented and unindifferent youth which got another real means of influencing on the development of Zaporizhzhya.