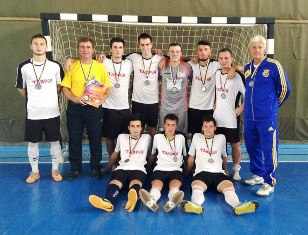 Games intrigue was kept until the last minute. Athletes of our university proved themselves as professionals in futsal coordinated and exemplary game. And as a result - our team won the silver medal, losing only in the final of the students of Kiev National University of Food Technologies with the score 4:2 (part played in their current holders of the Cup of Ukraine from 2014-2015 known Futsal Team "Manzana").
It should be noted that students of educational institutions from all over Ukraine took part in competitions in various sports, sambo, sumo, sports dance, sports aerobics, cheerleading, indoor soccer, chess and sport dancing in wheelchairs. 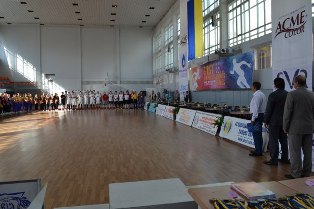 According to President of the Sports Committee of Ukraine Illia Shevlyak, in Ukraine hold annually universiades, but non-olympic athletes do not participate in it, and therefore can not fill discover their potential and in combat ready for the transition to adult high level larger international competitions. Now there was a possibility - thanks to Ukrainian student games that will become traditional, and next year will be entered in the register of the Ministry of Education of Ukraine. Today higher education has 966 schools, where three million gain knowledge of young people. Most of them - involved in sports. So nationwide geography games only expand. Also, will grow and the number of sports.