At ZNU held interactive conference from the French expert on biosphere 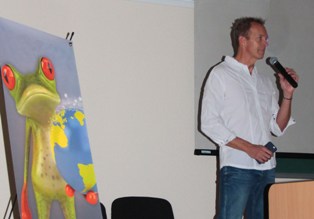 Recently in Le Bourget (France) finished Climate Conference 2015, which also took place in the framework of consultation with the Kyoto Protocol. Its purpose was signing an international agreement with keeping the average temperature of the planet at a level below 2° C. To bring the widest possible audience the importance of this global problem, which concerns every citizen of planet Earth, to Zaporizhzhya National University in the framework of the tour visited renowned specialist in the biosphere, Lecturer University of Toulon, a brilliant lecturer, author of the principle of interactive lectures accompanied by animated films and spectacular images on the big screen Dyufer Cyril. The event was held at the university with the support of the French Embassy in Ukraine and Zaporizhzhya center Alliance Française (Director - Ludmila Bogdanovska). Being a guest in higher education also coordinated the representatives of the International Relations Office (Head - Viktoriya Vertegel).

Interactive lecture held at ZNU for teaching staff and students: first with the translation, and later - in French. In the event all the participants organizers handed remote that during the conference served as a means of communication online audience with the lecturer. Also in the room information set several extensions of the backlight, which depicted the main character of the "Bio-sphere" - green frog holding a globe.
It should be noted that the seemingly difficult and serious issues lecturer failed to submit audience lively and dynamic. Avoid effect of academic dryness helped him as animation, spectacular images on the big screen, and own charisma, the ability to keep the suspense room intrigue, unexpected results.
The final chord of the event was black and white cartoon dedicated to the unfortunate discovery of the problems of humanity that are most harmful to nature, planet, pollution, inefficient use of resources, disrespect to our younger brothers etc.