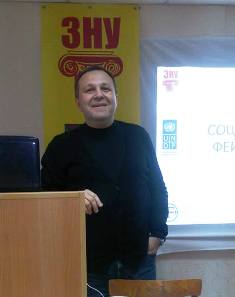 Last week at the Faculty of Social Sciences and Administration held a sociological third studio workshop, where the Dean of the Faculty, Doctor of Philosophy, Professor Maksym Lepskyi told to pupils about what is catfish, what are they and how to distinguish true information from false information. Senior pupils also performed practical tasks and teachers and students of the faculty helped them. The project is supported by Swedish Institute and Project EU-PDUNO (European Union Program of Development United Nations Organization) "Local Development, oriented to the community".

After listening to a brief lecture "Social catfish immunity: sociological tools", pupils and students were divided into two teams, one of which received 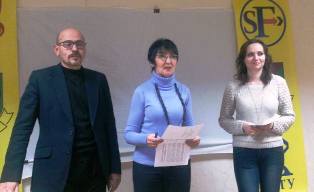 task to create your own catfiah knews, and other – disclose manipulation. In its work the boys and girls used the notebook with theoretical material concerning techniques that are used in the development of catfishes and methods of verification.
The development team of catfishes "released" the news on the TV channel«1+1» about the meeting dissatisfied cancellation scholarship of students which was actually common in the opening of the Christmas tree. The task was so interesting that teachers and faculty were not 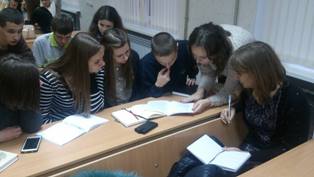 asides. They joined in the work and created a talk show with pseudoexperts-fraudsters.
Investigators of catfishes uncovered all the tricks of rival teams and together with professors of the Faculty of Social Sciences and Administration summed up results concerning technologies which used for cheating.
Next sociological studio workshop will be dedicated to manipulation. And it will take place at the beginning of 2016.