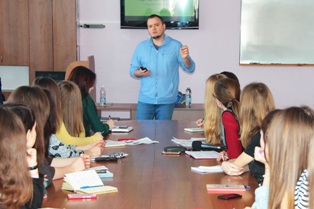 On February, 28 students had training with the professors of Mogylianska Academy of Journalism Mykhaylo Koltsov and Roman Kolgushev about the project StopFake.org.

They have told about what is “journalism of facts”, “interactivity”, “visualization”. Due to some examples they showed students their recent project for KyivPost. Mykhaylo Koltsov has told about what is fake and how we can fight with it, telling about the brightest examples of fakes.

the 2nd-year student of the Department of Journalism Tayisiya Zozul`