New opportunities open to students of the Faculty of Law 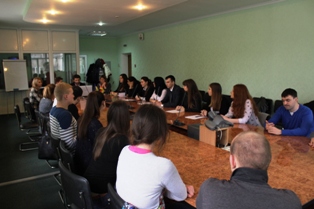 Yesterday, March 1, at the Faculty of Law summed up the contest of scientific papers of comparing the legal system of Ukraine and Germany (Public Service). It is worth noting that all participants performed intelligence of professional German legal language. More than 30 students of second year of the Faculty of Law of Zaporizhzhya National University were wished to participate in the intellectual competition.

It is to be recalled that the Zaporizhzhya branch of the School of German law was created at the Taras Shevchenko National University of Kyiv. So it is with the assistance of teachers of the law faculty for our students organized a competition of scientific works.
The jury, consisting of representatives of the teaching faculty, headed by its dean Tatiana Kolomoets, selected five best works, whose authors are: Kira Masyuta Oleg Pelipenko, Valentina Fedotova, Victoria Shilova and Tatiana Shehovtseva.
To determine the winners visited the News Director of the Center of German law Kiev National University named after Taras Shevchenko, Doctor of Law, Professor Roman Melnyk and online connected was Doctor of Law, Professor., The Institute of German party and international law and the study of political parties (PRuF), University of Heinrich Heine (m. Dusseldorf) Evgeny Sokolov.
The students in their scientific research examined the functioning of the public service career, encouraging public civil servants and improvement of their skills, as well as the issue of responsibility of public officials.
Kseniia Sukharenko