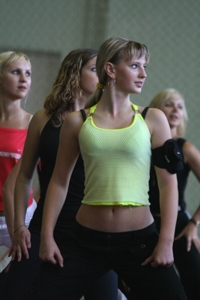 Traditional annual NIKE fitness-convention was held for the third time at Zaporizhzhya National University on October 23.

This the organizers decided to change form of the arrangement. Beforehand it was aimed at fitness popularization, but now the participants are professional sportsmen of regional scale. Fitness instructors, well known not only in Ukraine, but in the world, held high quality master classes for them.

“Convention is neither competition, nor the festival, -underlines Maxim Kozij, coordinator of the project. This is a methodological educational arrangement. High class instructors bring news and present them to participants.”

High level of skills was demonstrated by trainers of world scale. The most well known among them is Volodymyr Snezhyk, international master, who successfully presented his programs in Russia, Sweden, USA, Yugoslavia, Italy, England. He created his own style in fitness. Volodymyr has already embodied dozens of successful TV and video projects as producer and choreograph. Now he teaches others. He proposed convention guests to master two styles: LATINA and STREET DANCE. 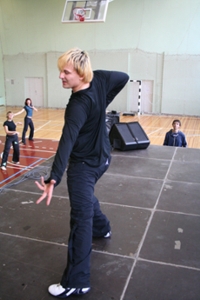 When the festival part was over arrangers and experts held round table and decided to continue further cooperation and gather at Zaporizhzhya National University next year for the Fourth international NIKE convention.