75 years – 75 trees. This is number of trees planted at the territory of ZNU campus   ЗНУ on Saturday October 29   during the arrangement  «Green Olexandrivs’k». It is the first anniversary arrangement of 2005 – 2006 academic year, dedicated to the 75th anniversary of our university. 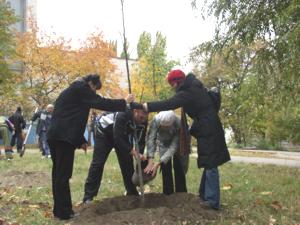 The arrangement was open by ZNU rector   Sergij Mykhailovych Tymchenko , he delivered speech and presented honorable guests: head of district state administration of Zhovtnevy district P. Zubkov and   head of State administration of ecology and natural resources in Zaporizhzhya region S. Bogun . Guests pointed out that Zaporizhzhya should turn into green and ecologically clean place.

When ceremonial opening was over students of all faculties and instructors which were willing to partake had to plant 5 trees each. The first tree to be planted was a rowan-tree, taken care of by the rector before the second ZNU building. Professor V. Liakh explained how to treat seedlings. Experts of botany and genetics department of ZNU biological faculty have chosen fifteen kinds of plants for planting. Besides they defined places where trees will grow the best..

Plants were given by Green economy of Zaporizhzhya and the arrangement was supported by regional state administration of Zhovtnevy region.