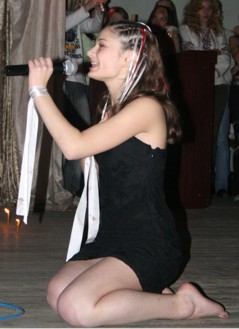 Festival “Let us introduce ourselves – 2005” dedicated to the 75th anniversary of Zaporizhzhya National University was held on October 25 -28.

Representatives of all university faculties demonstrated their skills for four days. The following members of jury estimated talents of the first year students - Vadym Kishenevsky and Natalia Pirog from student club, Svitlana Kondratenko from pedagogical department and head of student council Eugenia Popel. The best performances of each contest day were presented at gala-concert on November 3. ZNU rector professor Sergij Tymchenko greeted show winners and nominees and awarded them with honorary certificates. Valuable and sweet prizes were also a pleasant treat for talented first year students.

Four ZNU faculties - economical, historical, mathematical and faculty of social pedagogy and psychology - were represented by the first year students on the first contest day. Students of economical faculty started their performance with their own classification of Zaporizhzhya students and then presented new interpretation of Russian tale about “Princess Frog”. Historical faculty arranged all-Ukrainian action “East and West together” and meeting of two … drug addicts at their performance. They also “showed” an Indian film about melodramatic story of brother and sister Zina and Hitler. The third performance belonged to students of mathematical faculty. And then came out students of ZNU faculty of social pedagogy and psychology. Spectators could see two real aliens - 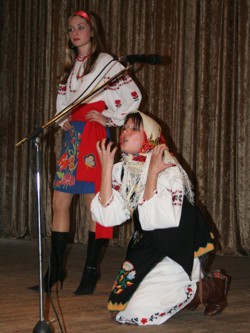 The second contest day was even more interesting. Representatives of ZNU faculties of sociology and administration, law faculty and faculty of journalism contested. Future sociologists demonstrated student fashion of new season and an extreme show of two bikers-sociologists. Young singer from the faculty of law was especially popular that day. Olexandr Stadnik presented his own love songs. Dozens of candles were lit during performance of journalists. Besides especially for Eugenia Popel they performed her favorite scene of KVN team ”Uezdny gorod”.

Not only representatives of biological and philological faculties and faculty of foreign philology contested on the third day but their fans as well. Real furor created dance of eastern beauties from harem. Contestants of philological faculty found

their muse at the stage, she helped them to gather money, taught them how to sing and dance.

The fourth day of the festival was the last one. ZNU faculties of physics, management and physical culture and sports contested on November 28. Students of physical faculty showed the best break-dance performance. First year students of management faculty showed their variant of “Princess Frog” tale. The last but not the least were representatives of the faculty of physical culture and sports.

Results were summed up on November 3. This year jury decided to name three winners but not to distribute the places between them. So the nominees of the contest “Let us introduce ourselves – 2005” are ZNU faculties of social pedagogy and psychology, faculty of journalism and faculty of foreign philology. Teams were awarded with certificates, they also received presents and what is the most pleasant – support of the spectators.