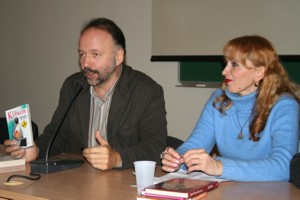 Iren Rozdobud’ko and Andriy Kurkov accepted the invitation from ZNU Faculty of Journalism and visited our university. They met with students and lecturers to tell about their work and to acquaint young people with their books.

The conversation turned out to be rather interesting. According to the authors, the present situation in our country can be viewed as “the most detective story”, which makes the ability to describe reality as it is the main secret of modern writer’s success.

At the suggestion of ZNU Rector, Professor S.M. Tymchenko, the meeting was held in on-line format. Brilliant monologues of “masters of word” were to audience’s liking. Iren Rozdobud’ko proved to be not a “glossy dame”, as critics ironically call her. Open-hearted, frank and shy at the same time, Iren shared her vision with future media-workers: “There’s no journalist without drive and courage.”

Iren called her colleague - Andriy Kurkov – her “literary tutor”. The audience appreciated Andriy Kurkov’s well-developed sense of humor. The listeners were dying with laughter when he was narrating about the beginning of his creative work. Joking aside, he had to overcome many difficulties: he was borrowing money to print books and later had to sell them himself. Today he is the richest writer in ! Now  he easily gives advices and states that perseverance is the secret of success. “Knock until they are tired and open the door!” – he said.

The guest consider the amount of fiction in Ukrainian language to be insufficient; this niche is empty, they say. So, there’s a lot of work for youth to do. Meanwhile, future masters of word started with the little – studying the books presented by the writers and looking for wishful autographs. Who knows, perhaps it will be the incitement to their future progress.