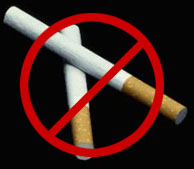 Indubitably, the best of all would be if you don’t smoke. It is obvious. But if you cannot get rid of pernicious habit, you should display decorum, smoking in specified places. Students of ZNU could notice recently that Rector’s decree “On the Prohibition of Smoking in ZNU” appeared near the entrance to every building of the university as well as on bulletin boards in hospices. The scheme is hanging nearby. Please be so kind to study it!

Within the framework of anti-smoking campaignm, the meeting of students with the worker of juvenile section of Region Narcological Dispensary Nadiya Snyegorova was held in hospice III recently. She told about pernicious influence of tobacco on human organism and stressed on the fact that during last 15 years not enough attention was paid to this problem in our country. Consequently, we have substantial percentage of smokers now, especially among young people. Now we have to take serious steps for decreasing the number of smokers to keep step with other European countries.

According to Worldwide Health Protection Organization data, about 100 000 Ukrainians die yearly as a result of their smoking habit. Around 40 per cent of population are smokers, including 4 million women.

In accordance with the Law of Ukraine “On Prohibition of Smoking in Public Places”, the main medical warning saying “Smoking causes cardiovascular diseases and cancer of lung”, as well as six additional medical cautions on health hazard, must be placed on every cigarette pack. The Law provides for responsibility for its violation.

Grygoriy Chausovs’kyy, Assoc. Prof. of the Chair of General  and Practical Ecology of ZNU, developed an interesting technology of nicotine dependence elimination. It consists of three stages. The first one is sound. Every time when opening a new cigarette pack, one hears some sound signal, warning about smoking danger. The second stage is tactile. The last one is a slight electrical discharge for those who can’t be stopped by other means.

It may seem funny for people who do not smoke, but it’s past laughter for smokers. So, please try not to bring yourself to the state when habits command you and not visa versa!