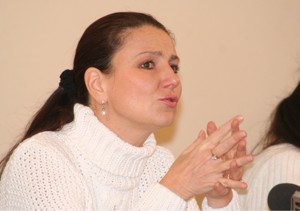 Inna Bogoslovs’ka presented the book “Country Development Plan”, that expounds the strategy of development of for the next 20 years. She told that “Viche” movement is supported by more than 100, 000 people at present, although it was founded only three years ago. During this period of time its members were making huge efforts to find out, what modern looks like and what prospects it has today.

The authors of the books arrived at interesting conclusions. Maydan Nezalezhnosti was the place for classical bourgeois-democratic revolution a year ago, they state. Thus, the Ukrainian state was able for 15 years of its existence to pass through the way other European countries were surmounting for 150-200 years. Before that was involved in the experiment of building socialism on basis of immature capitalism. Nowadays the situation is unique as well. For that reason all the processes in require deep comprehension. Ukraine is also unique for being situated between three “civilization spaces”: Russia and the East, they are peculiar for totalitarian or imperative states and religions, cultural wealth is the only value for them; the West – first of all, European Union with a different way of life (historically strong culture of civil society, accent on private property, religion stimulates aspiration for wealth); the South – Islamic world. So, is aimed to be both the bridge and the gate for different cultures, it is her power and histirical mission.

According to Inna Bogoslovs’ka, the society has outgrown the government in modern . At that, the majority of citizens are confident that they need strong society more than strong state, and such a position brings us closer to .

Today has got a unique chance to develop concurrently three types of economy: industrial, post-industrial and informational. The specificity of our time lies in the fact that unification is not the right way, while multiplicity brings success. Informational line of economic development is worthy of special attention. In this connection, adherents of “Viche Ukrayiny” movement call upon to bend every effort to developing the system of education. According to their plan, the proficiency level of lecturers of all educational institutions is to be raised, for the intellectual elite of society to train next generations in a different way, giving knowledge more effectively.

Besides, the book “Country Development Plan” suggests making the English language obligatory to study for all the children starting with the age of 3, as well as giving English the status of official in , alongside with Russian.

This book is very popular, so 60,000 more copies are to be printed (the first edition was 1 million copies), Inna Bogoslovs’ka said. She stressed upon the idea, that the nation today needs to be consolidated by the project of its development. “We are already doing it, - she said, - the book is “open”, so that it can be added.”

Statement “ is me” is the basic slogan of “Viche Ukrayiny”. Inna Bogoslovs’ka considers it to be apt, because Ukrainians are “fabulous individualists”, and now new leaders, who regard this way, are rising on political scene. Modern leader is a pragmatic with idealistic ends.

After all the conferees presented their speeches, many questions were asked by the audience. Particularly, students wanted to know whether activist of the movement would preserve their attractive plans if they come to power.