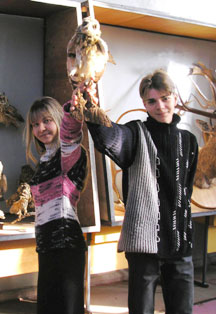 On April 2 ZNU was hosting the “What? Where? When?” rating tournament round within the 8th International Synchronous Championship ”Cities Cup”.

More then ten best teams of Zaporizhzhya, no more than 6 members each, were challenging for the victory. The same tournaments were held simultaneously all over the world. Our university was represented by “Al’batros” team. The tournament was organized by Youth Intellectual Development League of Zaporizhzhya and Student Intellectual Games Club of ZNU.

All in all, the connoisseurs had to answer 36 questions. The task was the same for all the participants of synchronous competition, wherever they were – in , , ’, or other country. It was aimed at the highest objectivity of results. The answers had to be written on special cards within a minute and given to so-called “seconds”, who passed them to the jury for evaluation. The jury was headed by Dmytro MOKUSHYN, representative of Intellectual Development League. He stressed upon high level of the participants and thanked Student Intellectual Games Club of ZNU for perfect organization of the tournament. Dmytro NADIYENKO, representative of Intellectual Development League  (the quizmaster) and Karyna NOVAK, representative of Student Intellectual Games Club of ZNU (jury secretary) were another members of jury.

“Banderlogi” combined team was the absolute winner on city level, while “Maniya Velichiya” were runners-up and “Mavzoley imeni Lenina” finished third. Top 6 teams formed Zaporizhzhya team. “Al’batros” team from ZNU is among them, as well as “Slavutych” form ZIEIT and another combined team “BOT”.

Final results of the round are to be available on April 26 at www.kubgor.chgk.info site. As for Student Intellectual Games Club of ZNU is has developed close contacts with Youth Intellectual Development League of Zaporizhzhya. From now on, “What? Where? When?”, “Brain-Ring” and “Svoya Gra” tournaments will be regularly held in .