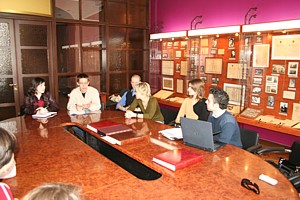 On April 7-9 Zaporizhzhya National University was hosting Regional Congress of European Student Forum (AEGEE), the largest unspecialized student organization in Europe. ZNU Student Council was the co-organizer of the event.

Viktoriya KOMISAROVA, second-year student of the Faculty of Management, Kateryna GUBENKO and Ulyana ZAPADNYUK, third-year students of the Faculty of Economics, and other representatives of our university took active part in the work of educational conference for European Forum members. In her speech Natalya P’YATERYK, vice-president of Zaporizhzhya representative office of European Student Forum and another student of ZNU, noted that the conference opens new prospects for international relations development for the youth from different parts of .

The collaboration between our university and student organization lasts for more than year already. That is why ZNU was chosen to host the congress. Different kinds of trainings in project management, lectures on PR, “Application of information technologies in the work of European Forum’s regional representative offices,” “Budget planning and implementation” were in the three-day schedule of the congress. The event was aimed at solving some questions of network development strategy, discussing new projects, as well as possibilities to take active part in the existing projects on local and all-European level. Alister de GETANO, member of directors committee of Student Forum’s European representative office was the guest of honour of the congress. Students from Kyiv, Odesa, Dnipropetrovs’k, L’viv, Mins’k and also took part in its work.

European Student Forum (AEGEE) was founded about 20 years ago. Its regional representative office in Zaporizhzhya exists for 5 years already. Holding different kinds of seminars, conferences, summer schools in all parts of are among the tasks of the association, while strategic aims are favoring European integration, developing collaboration between the youth from different European countries and studying foreign cultural ad scientific achievements.