Adviser of the President of Ukraine Olexandr Zinchenko visited ZNU 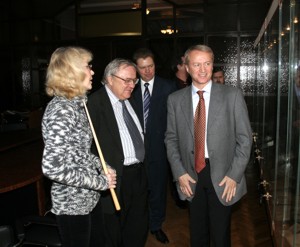 The main aim of his visit was the presentation of the pilot project on creation of vertical system which would engage such links: school, university, business (components that take leading positions in science of the 21-st century) and authoritative administration.

The adviser of the President of Ukraine Olexandr Zinchenko discussed that initiative with representatives of administration of ZNU and with its direction. Now Olexandr Olexiiovich resolves problems the agglomeration of science, educative domain and manufacturing with participation of authoritative structures.

The guest told about the experience of leading Ukrainian universities in Chernivtsi, Odessa, Lviv, Vinnitsa and Kyiv, where the experiment in creation of vertical system which would engage such links, as school, university and business had already begun. In Zaporizhzhya our national university takes part in the experiment. The participants of the meeting, except the Adviser of the President became the associate head of the Regional State Administration Valerij Cherkaska, the head of the municipal department of education and sciences Dmitro Sekirinskij, the director of Zaporizhzhya school № 7 and associate rectors of our university, the dean of the Mathematical Faculty, professor Sergij Gomeniuk and the manager informational center of ZNU Artur Aleexeev.