Graduate of ZNU presented his monograph 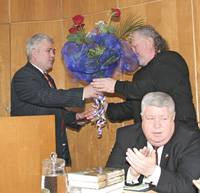 On February, 5 at the jubilee meeting of Zaporizhzhya Scientific Union to the name of Jakiv Novitsky, dedicated to its 10-th anniversary, presentation of monograph «Zaporizhzhya heritage of the South Ukraine of the last quarter of the 18-th – beginning of 19-th centuries». Its author is our graduate, the candidate of historic sciences, Valerij Kozirev.

It was a triple holiday: jubilee of the historic Union and presentation of a new book coincided with 55-th jubilee of Valeriy Kirilovich. Besides his associates in Scientific Union, a lot of guests came to congratulate the hero of the occasion: the Municipal Chairman of Zaporizhzhya Evgen Kartashov, the first deputy chairman of Regional State Administration Olexandr Berezhnoi, the deputy chairman of regional rada Leonid Anisimov and rector of ZNU Sergij Timchenko.

All of them stressed importance of the Union’s activity and especially such revolutionary direction in history, as gathering of oral evidences of long-livers.

Valerij Kirilovich told that the basis of the work became his candidate dissertation. The book’s edition is not large - only 1000 copies. Valerii Kirilovich dedicated it to his mother - Marija Timofijivna. Monograph describes preservation and transformation of cossack traditions after Zaporizhzhya Sich had been destroyed. Much attention is dedicated to the inner policy of Russian Empire in South Ukraine - administrative organization, the proprietary heritage of cossacks. Several chapters are dedicated to cultural traditions, the attitude of cossacks to church and nature. Most of the sources are printed as additions, so the monograph is a wonderful gift for historians. Due to sponsor aid of one of the banks the book will be send to all libraries of the city.

Valerij Kozirev mentioned that because of his close connections with our University, he personally would bestow several copies to our library.

Comment: Valerii Kozirev is a graduate of the Historic Faculty of ZNU, the director of Zaporizhzhya Cultural Center "Khortitsya". Valerii Kozirev created and now comprises "peoples’ library" in his native village Shiroke of Vasilivka area. Now its funds consist of about 15 thousand editions. Valerij Kirilovich provides subscription of 40 magazines and newspapers. It is the only village library in our region, where there is a computer. Special place belongs to a 100 of spiritual books, presented personally by Archbishop Vasilij and gathered by the Church of Saint Apostles Peter and Paul in town Vasilivka. Valerii Kozirev is also the head of Zaporizhzhya regional rada of Union of Security of Monuments of History and Culture. Valerii Kozirev is one of the founders of Scientific Union to the name of Jakiv Novitsky and the associate head of the board of the Union in organizational questions.

Comment: Zaporizhzhya Scientific Union to the name of Jakiv Novitsky was constituted in 1997 year. It united historians-enthusiasts of Zaporizhzhya region who set themselves the aim of exploration and popularization of scientific knowledge in history and culture of our region and, in particular, of the creative heritage of the famous native-region expert Jakiv Novitsky. One of directions of the research work of the Scientific Union became search of materials in history of South Area and oral history. For 10 years of existence of the Union about a hundred of books were edited in three series: «Zaporizhzya History», «Proprietary heritage of South Ukraine» and «Sources of history of South Ukraine». They also conducted near 60 expeditions over Zaporizhzhya, Odessa, Dnipropetrovs’k, Kherson regions and Crimea.