In ZNU memory of well-known linguist is honored 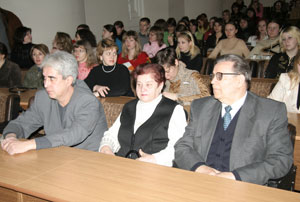 In Zaporizhzhya National University the evening of honor of Ivan Olijnyk passed, dedicated to 85-th anniversary of the great Ukrainian linguist, pedagogue, the candidate of philological sciences, professor of ZDU, who dedicated fourty years to educational and scientific work in our university. The philological faculty, in particular, teaching staff of the chair of Ukrainian language organized the action.

The rector of ZNU, professor Sergij Timchenko, the members of the family of Ivan Olijnyk – his son Viktor, granddaughter Tetyana, his colleague in creation of «Ukrainian-Russian and Russian-Ukrainian Phraseological Dictionary» Mikhailo Sidorenko, other colleagues of Ivan Stepanovich, his former pupils, lecturers and students of philological faculty attended the evening.

The action was begun with presentation of book «Ivan Stepanovich Olijnyk – a man, pedagogue, scientist» created by the collective of the chair of Ukrainian language, which for a long time was headed by well-known Ukrainian linguist. Not a bit official, but warm and sincere were reminiscences of the rector of ZNU, professor Sergij Timchenko, colleague of Ivan Olijnyk on Dnipropetrovs’k institute Mikhailo Sidorenko, the dean of the philological faculty, associate professor Tamara Khomyak, professor Vitalij Shevchenko, associate professor Natalija Zhuravliova – all of them told about Ivan Stepanovich as a talented scientist, the author of many educative editions, who not being a doctor of sciences, gained the rank of professor in Moscow, as a careful, hearty and principle colleague, as a patriot of his motherland.