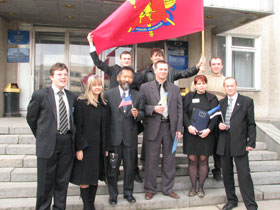 On April, 20-21 in Tocmac the 5-th Regional conference of schoolchildren and students “Youths of the region about euroatlantic organization. Youth public Academy” was held.

On April, 20 and 21 it was difficult recognize Tocmac: delegations of young men and girls walked on streets with badges and flags of Belgium, Canada, Russia, Hungary, United States of America, Italy, France and other countries of the world, on two days the town grew into a real youths Strasbourg and Brussels, because there the fifth Regional conference of schoolchildren and students „Youths of the region about euroatlantic organization. Youth public Academy” was conducted. Schoolchildren from Melitopol, Chernigivca, Gulyaypole, Energodar, Berdyansc and Zaporozhia, and also command of students from Zaporizhzhya national university came to participation in a conference. The inauguration of conference took place in the session hall of Tocmac town council. Greeting the participants of public Academy, President of NDO „Regional Euro-Atlantic League" Iryna Loucashenco wished everybody to open their potential, that would give possibility to realize and achieve the aim of life, in professional or personal sphere. Then students and schoolchildren passed to school № 1, where passed work of session committees. Two sections worked: „Zaporizhzhya youth model of Northatlantic Alliance" and „Zaporizhzhya youth model of European Union". One of the most disputable questions became balancing between European and Asian vectors in a worldwide policy and safety of humanity in the third millennium.

Students-delegates from ZNU worked in economic, ecological and social Committees model of European Parliament, and also took part in models of Summit of countries-members of NATO. 8 documents of the Youth models of NATO and European Union became the result of two-days debates and compromises.

The First secretary of Embassy of United States of America in Ukraine Michle Uehara marked the great value of such games-trainings for development of future regional elite and for informing about purposes of existence of such associations as European Union and NATO.

All delegates of the conference got Certificates of participants of the action and the most active ones were handed diplomas of Ministry of Foreign Affairs of Ukraine. Four from five delegates of ZNU, members of the club „Moderator" got such diplomas.