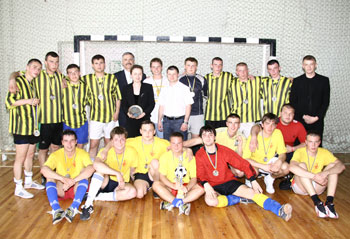 On May 16 tribunes of sports complex of ZNU were filled by students and fans, they gathered to watch competition in mini-football which passed under aegis of well-known graduates of the law faculty brothers Valeriy and Volodimir Sidorenko and direction of the law faculty of ZNU. The team of our university accepted guests from Zaporizhzhya law institute. Brothers Sidorenko, the well-known Ukrainian boxers, this time came forward in quality of organizers of the competition in one of the most popular kinds of sport - mini-football. 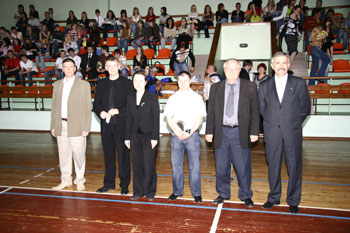 The game acquitted anticipations of fans. Fight which arose already from first minutes of the match, brought masses of sharp moments and 11 goals. Final account of the match 7: 4 and the confident victory of our lawyers. Memorable awards and the Bowl were handed by the world champion in version NBA, the champion of Europe of 2000, the champion of Ukraine in box, the graduate our University Valerij Sidorenko.