The Europe day in ZNU 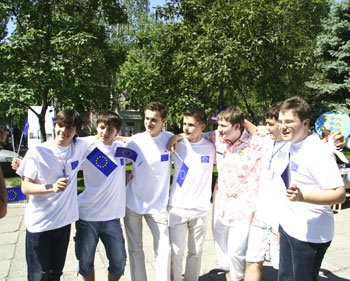 The day of Europe has become the holiday of peace for our University. We celebrate it not for the first time, not only on local, but on regional level. Last year we accepted numerous delegates of embassies of European countries in walls ZNU, we took part in work of “European city” on Festivalna square, this year we organized such “European city” on the territory of our university.

Administration of ZNU, Club of intellectual games "Moderator" with assistance of the Regional department of foreign-economic activity and youth organisations "Regional Euro-Atlantic League" and "Estonian Club" set the task – let the guests (about 200 students and pupils of Zaporizhzhya) to know as much as possible about various countries of Europe, international organisations, the prospects of their development and possible ways of European integration of Ukraine.

Representatives of volunteer organisations presented information literature, which acquaints with culture and life of countries of European Union, with history of EU. And during original "Youth Eurovision" sounded well-known songs in English, French, Spanish, Russian and Ukrainian.