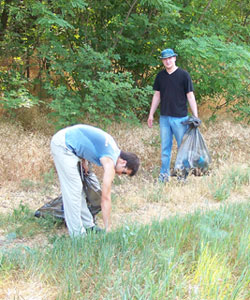 On June 2 students of ZNU cleaned Khortitsya of rubbish. The pearl of Zaporizhzhya – the isle Khortitsya – is annually damaged by holiday-makers and, consequently, - by rubbish, that they abandon after having a rest.

On June 2 Khortitsya was cleaned by students not only from the biological, but also from the physical faculty of ZNU. The gathered rubbish became a ponderable contribution into preservation of cleanliness of recreational zones of Zaporizhzhya, that are not numerous in the city, unfortunately. Just this category of population - the youth and students – is the most active force of ecological volunteer movements. That is we hope, that until universities exist in Zaporizhzhya, our favorite city would never turn into “plastic”, “cellophane” or some other valley.