Students’ scientific conference «University and We» 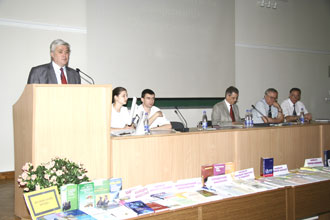 Today in ZNU the results of the students’ scientific conference «University and We» were summed up. This festival of science was opened by the rector of ZNU professor Sergij Timchenko. He said that this conference has to become priority in our University, because ZNU has great intellectual potential, however, together with the stack of unresolved problems. For instance, such problems concern governing the University. ZNU consists of 12 faculties, 4 independent departments, sanatorium and biostation on Khortitsya. All these structures need efficient governing.

On occasion of the Day of science Sergij Mikhailovich awarded Sergij Gomeniuk, the dean of the mathematical faculty with the honorary brevet of Ministry of education and Viktor Grishchak, the associate rector in scientific work - for their conscientious work. Also on occasion of the holiday of science many lecturers, post graduates and students of ZNU were awarded with brevets and monetary bonuses for their scientific work.

From the rector’s hands the winners of the contest of students’ scientific works «University and We»: Maxim Melnik, the student of the 4-th course of the biological faculty (the 1-st place), Mikola Martinov, the 3-rd year student of the law faculty (the 2-nd place) and Rapp Stanislav from the 2-nd course of the economic faculty (the 3-rd place) – got their awards. the 1-st place took the project of renewal of the recreational base «Slavutich» at Azovsk seaside in Kirilivka. It was offered by the student of the biological faculty Maxim Melnik. He not only developed the project verbally, but represented sketches concerning equiping territory of the base and even recommended certain kinds of plants.

Every faculty represented its scientific own direction of development to this or that sector of activity of ZNU. This work is systematic and concerted - in university the work in gathering data problems and proposals concerning the improvement of work of the University is carried on, “boxes of belief” are accomodated in all buildings, the meetings of the rector with active members of the students’ council are regular - in future all that will grow into general tendency of elaborating several independent conception of development of our native university.