On May 16 at the Faculty of Social Science and Administration held a round table on "European integration prospects of Ukraine". The guest of honor of the event was the candidate of political sciences, Associate Professor of the Institute of International Studies, University of Wroclaw (Poland) Tomash Shyshlyak who visited ZNU as part of a bilateral agreement on cooperation between universities. Participants in the roundtable were representatives of the Faculty. 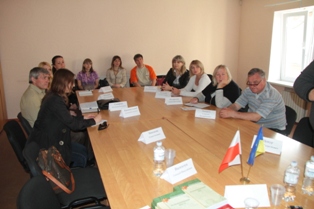 Tomash Shyshlyak presented books and magazines which had brought from Poland, spoke about the magazine «Wschodnioznawsywo», where he is the scientific secretary and promised to leave all for free publications to the Scientific Library of ZNU. He also spoke about the opportunities for teachers to publish in the journal free of charge and cooperate with Polish colleagues.
Tomash Shyshlak also spoke about ethnic policy of Poland. The lecturer spoke about the situation of minorities in Poland after the Second World War, their numbers and living conditions, legal rights and preserve national traditions, support or harassment on the part of the legislature and others. Interestingly, a member of a minority is only the person who has lived in the territory 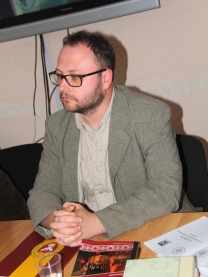 of Poland for at least 100 years. The state today 9 recognized national minorities, ethnic 4. Is not recognized as a minority and Silesians, Kashubians, and their tongues: Silesian - a dialect of Polish, Kashubian - the only regional language in Poland. Throughout his report the lecturer added visual number - maps, diagrams, photos, etc.
Also present were very interested to know what criteria guided the Poles at distinguishing minority of Russian and Ukrainian groups, and what exactly different national and ethnic minorities.
After the roundtable participants suggested Tomash Shyshlyak work on joint projects, and he, in turn, invited the representatives of FSSA to Wroclaw University.

Scientific-practical conference "Arabic language and the science" was held on the Faculty of Social Sciences and Public Administration of ZNU
The project “English Speaking club: cinema on Wednesdays” with the participation of school students continues its work on the Faculty of Social Sciences and Administration
Ukrainian and foreign economists have discussed the integration issues
The XI International Summer School of Social Sciences is taking place at ZNU
Hundreds of pupils and their parents have learnt about the innovations in Ukrainian Enrollment tests in 2016 due to ZNU
© 2018 ЗНУ Запорізький національний університет, 69600,
м. Запоріжжя, вул. Жуковського, 66,
Відділ діловодства тел./факс +38 (061) 228-75-08
Приймальна комісія тел. (061) 228-75-38 та (061) 289-12-68
Офіційна пошта