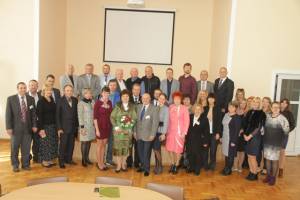 September 30 at the Faculty of Economics of ZNU was held the VI International round table conference “Integration of education, science and business”. The participants were more than 50 scientists from Ukrainian universities and from abroad, and also representatives of business and management structures, leading enterprises of the region, public organizations, among whom were many ZNU graduates.

Year in year out the Faculty of Economics holds this event within a framework of the integration of different fields for promoting sustainable economic development of the Zaporizhzhya region and Ukraine in general. Our University was represented by the Pro-rector for Research, Professor Hennadiy Vasyl'chuk, the Dean of the Faculty of Economics, Professor Alla Cherep, as well as scientists of that faculty. 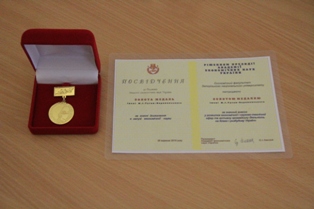 The Pro-rector for Research, Professor Hennadiy Vasyl'chuk addressed the round table participants with a word of salutation on behalf of the administration and of many thousands ZNU staff, expressing congratulations and best wishes on the occasion of Teachers’ Day and the 25th anniversary of ZNU Faculty of Economics. In addition, he noted that economists were the driving force, which had to determine in what direction should move the society to have a significant sustainable development.
The Dean of the Faculty of Economics, in turn, thanked the guests who visited our University that day and presented the participants to each other. Also Alla Cherep noted that throughout the years the Faculty of Economics and its academic staff had been ensuring high level of students’ training. In particular, today its graduates work in the Zaporizhzhya regional public administration, the Ministry of Finance of Ukraine and other government or private institutions abroad, as well as provide the development of Zaporizhzhya region.
Many of them are employers and provide training places for young generation of students-economists. On the other hand, there are a number of problems that require common solutions. That was why in the framework of that round table meeting gathered representatives of science, business, government and other organizations. It was referred to the opportunity for trainees to work with a “closed documentation” at the enterprises, to the increasing capabilities of cooperation between entrepreneurs and scientists. Due to this, the scientists of the Faculty of Economics (teachers and students) are engaged in the improvement of employment position instructions for representatives of Zaporizhzhya industrial enterprises. 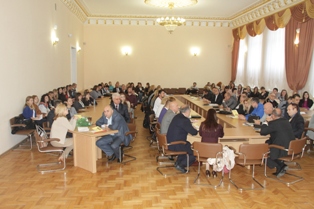 Besides, there was talk of the operation and development of the Business incubator “BI – Zaporizhzhya”, which today operates on the base of ZNU Faculty of Economics. In particular, it was reported that the rector of ZNU Mykola Frolov gave much attention to the development of business incubator activity areas, and the colleagues from the Poznań University of Economics (Poland) also showed interest in that activity.
At the meeting the scientists considered separate issues and global problems in economic, environmental and financial fields. There were discussed the directions for the development of economic education and the need of the expansion of the territorial communities’ powers as the foundation of civil society; also were discussed the need of reforms in the political and legal spheres, in the tax system, and so on. There was a talk of cooperation and writing scientific articles. During the round table meeting many greetings were expressed by the participants to the Faculty of Economics. The scientists from different universities as well as representatives of government and business circles gave reports on the current issues.
Furthermore, scientists and entrepreneurs brought up a lot of interesting topics for discussion in the circle of the round table participants. Thus, the head of the All-Ukrainian union of academic economists Oleksandr Kendyukhov presented his vision on the possibilities of adaptation in the conditions of Ukrainian economy of a business-friendly progressive tax system of Monaco. He also promised to promote the contract execution of cooperation between the ZNU Faculty of Economics and the International chamber of Commerce in the framework of the program of science, education and business integration. 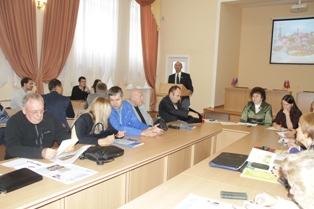 In addition, the chief of the Research department Viktoriya Menyaylo told their colleagues about the creation of the web platform on the basis of Ukrainian higher education institutions (Kharkiv innovation platform, a research platform of the Dnipro National Mining University “Information and marketing site”, etc.), which opened wide opportunities for the interaction of national and foreign science and business, attracting investment, and presented a project of a similar platform on the basis of ZNU – “Incub”. Now it is undergoing tests, after which young scientists and students will be invited to submit their competitive projects and elaborations within the framework of the activities aimed at the development of the Zaporizhzhya region. 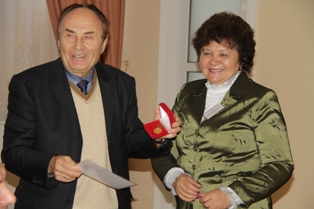 After the round table meeting participants and guests of ZNU took part in the anniversary celebration of the ZNU Faculty of Economics.