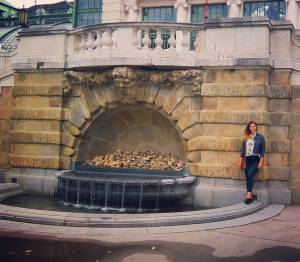 Recently a student of the Faculty of Biology Yelyzaveta Verba has returned from an internship in the capital of Bulgaria, Sofia. During the third course she was studying at the University of Chemical Technology and Metallurgy in specialty “biotechnology”.

Yelyzaveta took part in the program Erasmus Mundus ELECTRA, which she found out from representatives of the ZNU Department of International Relations. They supported the student when she was preparing the documents. Despite the fact that it was the first internship experience, the girl was able to combine it with the studies at ZNU. The student didn’t know Bulgarian at all. The first time was difficult both at the lectures that were in English, and in everyday life where knowledge of the Ukrainian and Russian helped very little. Nevertheless, after a while Yelyzaveta got used to it and started to communicate in English more than in her native language. It helped to find new friends from other countries and to come home with better level of foreign language.
Moreover, Yelyzaveta related about the study itself: “As for studies, it differs from what we have. For Bulgarians it is impossible to study more than 4 subjects per semester. Therefore, with such a good base that was given in ZNU, we could quickly and successfully complete those subjects that we taught in Sofia. I personally enjoyed the practical classes as there we had the opportunity to work with the new equipment, by the way, about some I only heard or saw in the videos. Grading scale was unusual, because there were not 5, but 6 points. All the exams were written: a few tests, and 8-10 open-ended questions. We were preparing for the exams all together and very diligently”.
Besides, Yelyzaveta Verba noted that Bulgaria had well developed system Erasmus Student Network: these were people who helped the internship participants with all problems and requests. They arranged parties, watching movies, and generally tried to make the integration into a new life quick and easy. “I became friends with the girls from Georgia who traveled with me to Italy and France on the autumn holidays, also with the Spaniards, the French and the Germans. And, of course, I can’t forget Bolgarians, with whom we still keep in touch,” emphasizes Yelyzaveta.
The girl lived in the university’s residence hall. The conditions were good. She came away with wonderful impressions as the internship was a great experience of studies and living abroad.