ZNU scientists have studied the contemporary challenges of foreign philology 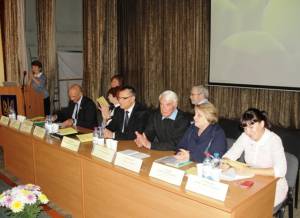 The seventh of October VIII International scientific conference “Foreign Philology in the XXI century” began its work in Zaporizhzhya National University. This time 150 application forms were received. Among others, there were 3 foreigners, Doctors of Science from Belarus, Germany and Uzbekistan, and 14 professors from leading national universities. Besides, the event expressed a wish to participate in the event associate professors, doctoral students, graduate students, master’s students and students from 19 Ukrainian cities. Another feature of a current conference was that the organizers timed it to coincide with the 50th anniversary of the ZNU Faculty of Foreign Languages.

At the beginning of the plenary session the Vice-rector for Research, Professor Hennadiy Vasyl'chuk congratulated all the participants of the meeting. He stressed that such conferences were the basis of scientific progress and development of the Faculty and the entire University. In addition, Hennadiy Vasyl'chuk emphasized the main merits of that legendary, according to him, faculty and wished to teachers and students success and achievements. 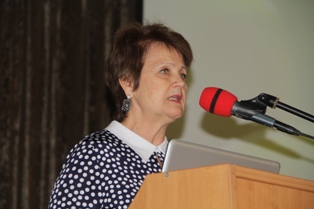 The Dean of the Faculty of Foreign Languages, Associate Professor Halyna Moroshkina noted that 50 years was a great date for the faculty, but its achievements were measured not in years, but in the creative activity and tireless work of its team. Halyna Moroshkina told about some other events that were timed to the anniversary of the faculty, in particular about the opening of a new classroom in the 2nd campus building named after its founder, the famous scientist Vasyl' Sokyrko, and about publication of the collection, which included the best methodical works of the representatives of an academic teaching staff.
Moreover, the honorary guests of the event gave their reports before the participants of the plenary session: Professor of the Department of Translation of National Mining University (Dnipro), Anatoliy Alekseev, who at one time had been teaching at our University for almost 10 years, the Dean of the Faculty of Journalism, Professor Volodymyr Manakin and the head of the Department of Communication Studies, Advertising and Public Relations, Professor Olena Semenets'. Also, the researches were presented by the teachers of the Faculty of Foreign Languages: Professor of the Department of English Philology, Hanna Prykhod'ko and Associate Professors of the same Department Iryna Haluts'kykh and Tetyana Kozlova. In addition, the presentation was made by the teacher-volunteer from Nancy (France) Jean-Luc Issele. In their reports there was talk of the isomorphism of linguistic and biological codes, biocognitive dimensions of estimation, verbal simulacrum and other relevant areas of study in linguistics. 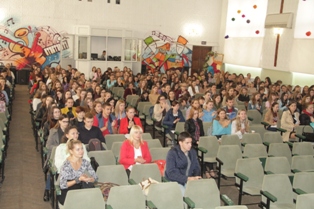 Furthermore, those present at the event were able to take a look at the themed exhibition, prepared by the staff of the Research Library. That exhibition included the latest researches in linguistics and literature studies.
Then teachers and students continued their work according to the workshops. The participants of the session had the opportunity to exchange the most current scientific information and to discuss topical issues of studying foreign linguistics.
The eighth of October, the scientists took part in the round table meeting “Theoretical and methodological challenges of foreign philology”, and also summed up the results of the conference.