ZNU visited by Deputy Attaché of culture and education of the U.S. Embassy in Ukraine 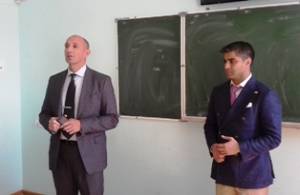 The tenth of October in the framework of the discussion of the project “Academic virtue in Ukraine” our University was visited by the Deputy Attaché of culture and education of the U.S. Embassy in Ukraine, responsible for academic matters, Mohammed Motyval. The meeting took place thanks to the Memorandum of Cooperation between American Councils for International Education and Zaporizhzhya National University. 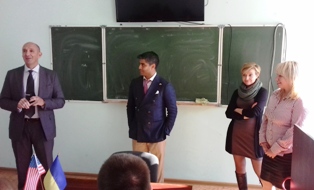 t Ukraine, National University of “Kyiv-Mohyla Academy”, Ukrainian Catholic University and Fairfield University (USA, Connecticut).
The project coordinators in our University also visited the meeting of Mohammed Motyval with students and teachers of ZNU, the Vice-Rector for Research Hennadiy Vasyl'chuk (on behalf of the administration) and the student of the Faculty of Sociology and Management Oksana Kovtun (on behalf of the students), as well as the head of the International Office of ZNU Nataliya Kostenko. The guest was communicating with the audience in English, the translator of Mr. Mohammed was Professor of Theory and Practice of Translation from English language of the Faculty of Foreign Languages Iryna Andreeva.
During the meeting Mohammed Motyval briefly described the goals and objectives of the Project of promoting academic virtues, the activities of the project representatives in Ukraine and the reform of the educational system of our country, drew attention to the cases of dishonesty in the United States of America and its punishments and so on. The lecturer was more interested in the attitude of Ukrainian students to that program and their opinions concerning how young scientists see academic virtue, or vice versa dishonesty. So, those present basically put questions to Mr. Mohammed and he gladly answered them.