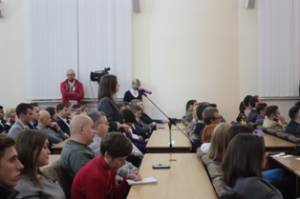 During a visit to Zaporizhzhya National University the Prime Minister of Ukraine Volodymyr Hroysman not only gave a lecture to University staff and representatives of local media about the priorities of Ukraine's development, but also answered numerous questions from the audience. Those present at the event took advantage of the invitation of the rector of ZNU, Professor Mykola Frolov, who noted that in our University there was a democratic tradition: anyone could ask the honorary guest questions on relevant topics. The audience wanted to know Volodymyr Hroysman’s opinion on topical issues of politics, economy and ecology. However, there were some less serious questions, particularly about the student years of the Prime Minister, to which he responded humorously.

A good many of participants took an opportunity to ask the Head of the Ukrainian Government: the chief accountant of ZNU Vasyl' Tymoshyk, the executive secretary of the Admission Committee of our University Damir Bikulov, the representatives of the academic teaching staff, the student activists, the former combatants of the anti-terrorist operation in the East of Ukraine, the public figures and journalists of the local media. 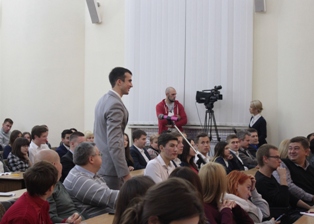 The Prime Minister was asked about the effective date of the promised government targeted support to combatants’ children. And the prospect of salary rise not only for teachers but for support staff of the University that is involved in the educational process, about the possible financial inclusion in the budget for the full repair of the university residence halls, about the providing entry level jobs for young specialists, graduates of the University and so on.
Furthermore, Volodymyr Hroysman was asked a number of questions unrelated to the functioning of the University. Those present at the event wanted to know the opinion of the guest of honor on opportunities at the country level to provide support for self-employment in positions of the former combatants of the anti-terrorist operation in the East of Ukraine, about his point of view on environmental problems and the introduction of a visa-free regime for our country and so on. The Head of the Government gave meaningful answers, stressing that he would make every effort to develop our country. However, in his opinion, positive changes are possible only in case of the consolidation of all citizens of the country. 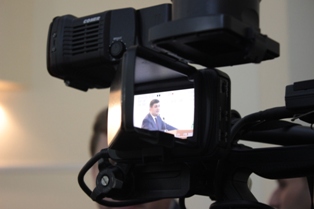 Nevertheless, the final question from the students was a surprise for the guest of honour as well as for all those present at the event. After suggestions to choose a profession that would be competitive on the labour market, and focusing the audience on the importance of modern education, the young people were interested in: what memories of the student years remembered Volodymyr Hroysman? The Prime Minister explained that he chose the profession of a lawyer, admitted to the university in 1995, when the formation of the state was in progress in the eyes of future lawyers, so it was easy to study. He gratefully spoke about his teachers and assured that the studentship gave him a lot of good memories.
In conclusion Volodymyr Hroysman thanked those present at the meeting for their active social position and interesting questions. On the proposal of the rector of ZNU, Professor Mykola Frolov the audience cheered the honorary guest of the University.