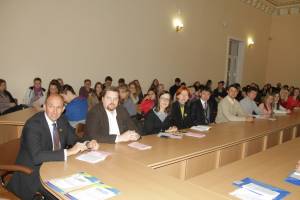 The two-day work of the XI International scientific and practical conference "Challenges and development prospects of new economy on world, state and regional levels" was completed in ZNU. The session was attended by 184 scientists and business representatives from eight countries: apart from Ukraine there were represented Italy, Poland, Czech Republic, Slovakia, France, Belarus, Kazakhstan, and Lithuania. They were pondering on the ways of development of the world and Ukrainian economy, were offering the innovative economic models based on the experience of foreign enterprises. 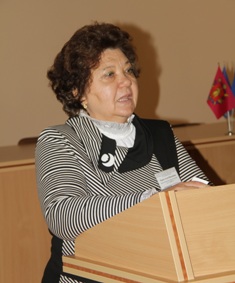 The Vice-rector for Research Hennadiy Vasyl'chuk and the Dean of the Faculty of Economics Alla Cherep opened the conference and introduced the guests. They stressed that the joint scientific and practical events attracted more and more guests every year – representatives of the national science and foreign colleagues, who joined the solution of the topical issues of Ukrainian economy.
Thus, the meeting was attended by the representatives of the Vilnius Chamber of Commerce and Industry, the partners of the international twinning project which is implemented jointly with the Zaporizhzhya Chamber of Commerce and Industry in the framework of the programme of the European Commission East Invest II. On the delegation the Faculty of Economics was visited by the member of the Board of Directors of the Credit Union Taurimas Valys, the project manager of the Vilnius Chamber of Commerce, Industry and Crafts, the specialist on export marketing Audrone Masandukayte, and the Vice-President of the Zaporizhzhya Chamber of Commerce and Industry Dmytro Antonyuk. As the project leader Taurimas Valys informed during the plenary session, the main task of the partners was to exchange experience with the purpose of implementation of norms and standards of the European Union, the exchange of know-how and the best practices between the EU member states and their partners-beneficiaries. In particular, the Republic of Lithuania has experience in effective adaptation of the economy to the standards and practices of the EU, which can be valuable and useful for Ukrainian specialists of the economic sector. 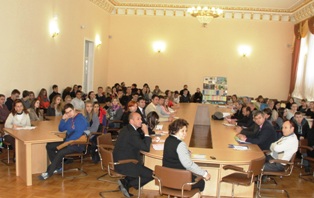 At the plenary meeting the scientists and business representatives made reports and shared ideas on the creation of economic development models. The discussion was focused on the challenges and problematic points caused by the difficult economic situation in Ukraine. There was talk of the solutions to those problems. 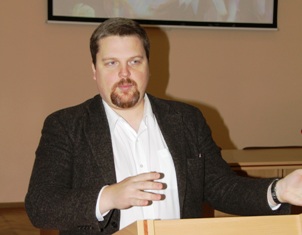 Then, a lot of significant research results and interesting economic proposals were presented at the plenary session and during the workshops, which this time was seven. The leading economists were solving the current theoretical and practical issues, were examining problems and prospects of the development of national economy in conditions of European integration and the general globalization processes, the innovative areas, and management and marketing technologies, the rational use of economic and labour resources, national economic security issues, etc.
During the event there also took place an online conference with the student of the Faculty of Economics Iryna Trylis. She is studying now at the University of Foggia (Italy) under the programme "Erasmus+". She told the audience about her impressions and those features which distinguished the learning process in foreign universities; in particular, it was the ability to choose the disciplines which were necessary for student. 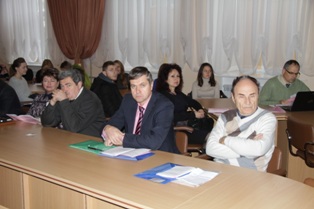 Furthermore, according to the results of scientific meeting, a number of the best reports and research projects were awarded the certificates of merit.