The first round of Women's Volleyball Super League held in ZNU 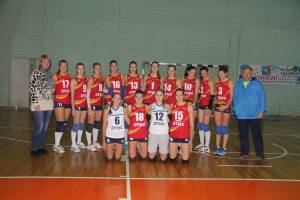 A new season of the Championship was opened by the team "Orbit" from Zaporizhzhya and "Regina" from Rivne. The matches took place in the sports complex of Zaporizhzhya National University on 21 and 22 October. Both teams scored a victory: "Orbita" on Friday, and "Regina" on Saturday.

In the standings, following the results of the matches, "Orbit" was in the 5th place, scoring 1 point. As for the first one, it finished 1:3 (14:25, 25:23, 15:25, 19:25); the second - 0-3 (18:25, 19:25, 17:25).
In the off-season quite drastic changes were waiting for "Orbit": the coaching staff and almost the entire team composition had changed. Young volleyball players are trained by the coaching duo of Iryna Komissarova and Serhiy Popov. During this time, the team has already played in an international tournament in Lutsk and has joined the competition for the first Super Cup in the history of Ukrainian volleyball.
The girls were also actively supported by the representatives of sports sector of the Student Council of ZNU. According to its head Vladyslav Sakhatbudinov, the University has a developed strong fan-group of such events. Thereby, the warm support of the grandstands is only for the good of the players’ professional achievements.
On October 26 the "Orbit" meets with "Chemist" in Odessa.