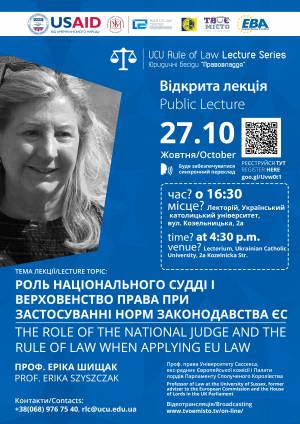 The Ukrainian Catholic University in cooperation with the U.S. Agency for International Development (USAID) continues a series of lectures UCU Rule of Law Lecture Series from leading American lawyers, devoted to the actual challenges and problems in the field of consolidation of the rule of law, justice and fairness. The project is organized by the UCU Rule of Law Center, together with the USAID Justice Sector Reform Program "New justice", in cooperation with the Ukrainian Bar Association and European Business Association. Information partner UCU Rule of Law Lecture Series – the portal "Your city". The Faculty of Law of Zaporizhzhya National University has also joined this project.

October 27, in the lecture hall of the Academic building of the Ukrainian Catholic University the eighth lecture from UCU Rule of Law Lecture Series was held in the framework of an open lecture of the law professor from the University of Sussex (UK), lawyer, former adviser of the European Commission and the House of Lords of the Parliament of the United Kingdom Erika Shyshchak on the topic: "The role of the national judge and the rule of law when applying EU law".
The lecture was held in English. The simultaneous interpreting was provided during the meeting.
The event was attended by the representatives of the professional legal environment, academics, law students and everyone interested in the rule of law and the legal system reform in Ukraine.