Professors, students and friends of Faculty of Foreign Languages celebrate its 50th anniversary 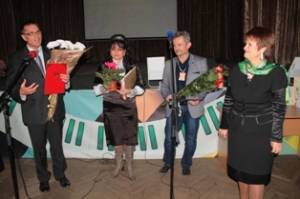 Professors and students, graduates, representatives of administration and other faculties, and a lot of friends gathered to congratulate the Faculty of Foreign Languages, to remember its considerable achievements and wish new victories.

At the beginning of the festivities the Dean of the Faculty of Foreign Languages, Associate Professor Halyna Moroshkina thanked all people who devoted themselves to the word: these wonderful teachers for half a century had prepared over 10 thousand highly qualified specialists, who are well known and appreciated far beyond the borders of our country. 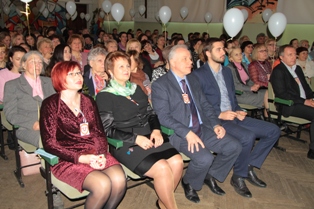 Rector of ZNU, Professor Mykola Frolov, in his congratulatory speech noted the achievements of the Faculty in the training of the real professionals, as well as in the implementation of the Concept of learning a foreign language, which involved all faculties and promoted academic mobility of teachers and students of the University. Mykola Frolov also presented the gift from the leadership of ZNU for the staff of the faculty: each Department would get a new computer. In addition, the rector of ZNU handed over the letters of acknowledgment to the best professors and students. Moreover, Nadiya Stryukova and Tetyana Kozlova were awarded the Orders of Zaporizhzhya Regional State Administration. Also, Kateryna Ruzhyn and Oleksandr Shevchenko were awarded the Orders of the Zaporizhzhya Regional Council. Also among the award recipients were those who received Certificates of Merit of the Regional Council.
Besides, professors, staff, students and graduates of the Faculty of Foreign Languages were congratulated by the Deputy Head of the Zaporizhzhya City Council Anatoliy Pustovarov and the Chairman of the Regional Administration of the Oleksandrivsky region Valeriy Mostovyy. The representative of the faculty Iryna Shama 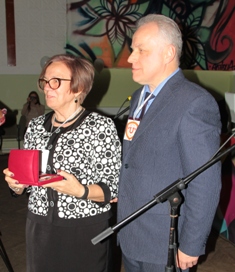 was awarded the Medal of Honour of the mayor.
Furthermore, the Dean of the Faculty of Foreign Languages Halyna Moroshkina recalled glorious pages from its history. Former Deans of the faculty, Professor Yuriy Zatsnyy and Associate Professor Kateryna Ruzhyn shared with the audience their memories and listened to the sincere gratitude for the great contribution to the development of the Faculty. There was also a video message from another former Dean Nadiya Zlobina.
In general, the faculty received a lot of video greetings from its teachers and graduates who were abroad, as well as its foreign partners. In particular, it was congratulated by the leadership of the University of Maine (France) and the interpreter Herbert Schönemann from Germany, as well as by the doctor of philosophy of the University of Liverpool Kiron Reid and the trainee from the University of Maine Clemence Langlais, who were in ZNU last year. The foreign lecturers who worked at the faculty, Jean-Luc Issle (France) and Nicole Steinberg (USA), also expressed congratulations and gratitude for the cooperation.
The numerous vocal and dance performances prepared by students and graduates created a magnificent festive atmosphere. There were also some laughing moments: thus, student activists presented a video in which the world's political leaders kind of congratulated the Faculty of Foreign Languages on an important date.
The celebration of the anniversary was a great opportunity for graduates to visit the University, to meet former groupmates and teachers, to share memories and to find out the next stages of its development. All participants rejoiced in the achievements of professors and students and wished continued success in their activities.