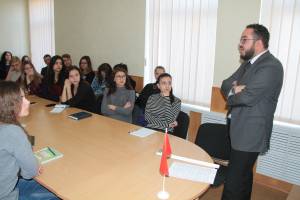 The Head of non-governmental organization "Arabic Center" in Zaporizhzhya, the President of the Association of National Minorities of Zaporizhzhya region, the member of the Association of Arab doctors of Ukraine Naufal Khamdani met with professors and students of the ZNU Faculty of History. It wasn’t the first time that a well-known public figure had attended university, but this time he appeared in the unusual perspective – during the meeting of the International club he gave a lecture on the history of the countries of North Africa "Security and territorial integrity issues of the countries of the Maghreb", in particular it was about the Kingdom of Morocco.

The coordinator of the event was the Department of World History and International Relations and its Chairholder Olha Maklyuk. 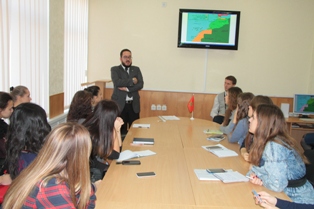 Naufal Khamdani told the audience about the historical development of North Africa from the medieval period to the present day. He focused special attention on the development of relations and redistribution of areas of influence between Arab countries (Morocco, Western Sahara, Algeria, etc) and European countries (Spain, France, Holland).
Some conflict points of the historical development of these territories are not solved today, that causes frequent military conflicts in the region. The most stable today is the situation in the Kingdom of Morocco, because the multiethnic population loves and respects his King Mohammed VI Ben Al Hassan. Thanks to his political will the democratic transitions occur in the country, and the powers of the monarch are limited by the Constitution.
Considering the reasons of instability in the region, the lecturer also touched upon the development of various political movements.
Besides, Naufal Khamdani turned out to be an excellent lecturer and was able to draw attention not only to the historical aspects of the development of his country (Morocco), but made to feel unindifferent to the problems of this small country. The lecturer gave comprehensive answers to all questions. In particular, he pointed out that poverty and ignorance of the population were the main reasons for conflicts in Northern Africa.
In addition, Olha Maklyuk thanked the guest for his informative lecture and expressed hope for the further cooperation in the framework of historical trends, because the historical disciplines taught at the faculty were generally focused on European history. Thus, the audience was interested to hear from the representative of this region and witness of contemporary events about the historical development and the current political situation in the countries of North Africa.