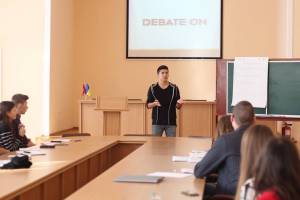 The activities to promote academic integrity among students and teachers continue at Zaporizhzhya National University within the framework of mini-grant "honestly_education" received by the University from the American Councils for International Education. One of its mini projects was the Debate tournament "Honest education: myth or reality?" which gave the opportunity to all the concerned students and teachers of ZNU to express their own opinion on the problem of cheating, plagiarism, bribes and the quality of education.

With the participation of Zaporizhzhya Branch of the Debate Federation of Ukraine, training was held for 16 teams of University devoted to the debate games, development of argument skills, etc. The coach was Vlad Nadtoka, Deputy Chairman of Zaporizhzhya Branch of "Debate Federation of Ukraine", graduate of the Summer debate school 2015, and participant of many national debate tournaments.
In addition, it should be mentioned that until November 13, the students’ works are accepted for the contest "Test yourself on integrity". Any student of ZNU has the opportunity to send his work, written during the university studies to email chesnoZNU@gmail.com. свою письмову роботу, написану за роки навчання у ЗНУ – це може бути індивідуальна, практична, курсова робота або тези, статті. According to the results of a check of works through the program "Anti-Plagiarism", the winners are selected, the students, whose works contain a minimum percentage of borrowings from other works, get the prizes. Furthermore, the participants will receive guidelines on the rules for formatting references and citation of the text that will be useful in the preparation of the next academic works.
The winners of the Debate tournament, as well as of the contest will be announced and awarded during the meeting dedicated to the results of the Project SAIUP at ZNU, which will be held in December this year.
Photo gallery: https://vk.com/album-3183283_238882199