ZNU visited by Ambassador of Latvia in Ukraine, Juris Poikāns 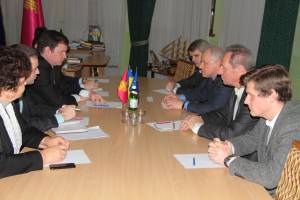 During a working visit the Extraordinary and Plenipotentiary Ambassador of Latvia in Ukraine, Juris Poikāns, visited Zaporizhzhya National University. He met with the representatives of the University administration and the rector of ZNU, Professor Mykola Frolov, in particular.

The meeting was also attended by the first Vice-Rector Oleksandr Bondar, the Vice-Rector for Educational Research Volodymyr Volkov, the head of the Student Council Anton Nazarenko. Besides, during the working visit of the Ambassador, the Dean of the Faculty of Economics Alla Cherep was acting as a local independent expert for better understanding of the socio-economic situation in the Zaporizhzhya region.
During the meeting between Juris Poikāns and the leadership of the University, Mykola Frolov had the opportunity to present to the guest the activities of the University as a leading higher education institutions of the region. The rector drew attention to such facts: 12,5 thousand students study at University, one and half thousand professionals work, 16 faculties operate, two colleges, seven Academic Councils. He also noted a powerful high-quality staff of scientific and pedagogical workers: it is 81 Doctors of Science, Professors and 513 Candidates of Sciences, Associate Professors.
In addition, Mykola Frolov mentioned several priority projects of our time: promoting of academic integrity in the University and participation in relevant programs for its implementation, the development of the Honour Code; the introduction of the Conception of foreign language learning, promotion of academic mobility; researchers of the University in the field of energy saving; constant care for the improvement of the modern campus and the material and technical resources in general.
Mr. Poikāns sincerely thanked the rector for an interesting story, and noted that Ukraine and Latvia are very similar countries, they have common traditions. Also, the guest stressed that for the development of further contacts with the Zaporizhzhya region, it is planned the establishment of the institution of honorary consuls, in which the cooperation with Zaporizhzhya National University has the opportunity to continue through the implementation of the joint Latvian-Ukrainian education projects.
The visit continued with a meeting of the Ambassador with the students of ZNU.
Photo gallery: https://vk.com/album-3183283_238894135