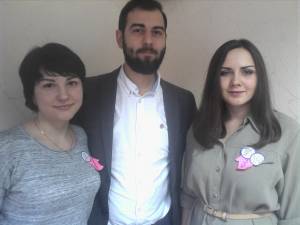 The other day the Debate tournament "Honest education: myth or reality?" was held at ZNU in the framework of the Project of academic integrity promotion in Ukraine (SAIUP). It was attended by the representatives of ZNU: students, teachers, researchers and guests.

The Project of academic integrity promotion in Ukraine (SAIUP) has been recently started at ZNU, which is implemented by the Ministry of Education and Science of Ukraine with support of American Councils for International Education and the U.S. Embassy in Ukraine. In its framework the Project of Honour Code of ZNU was developed and submitted to public discussion: 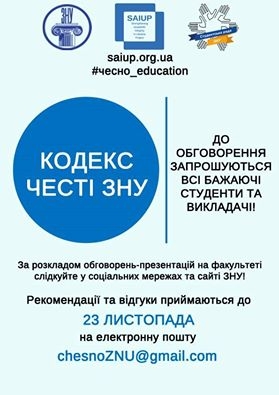 proekt-kodeksu-akadem__chnoyi-dobrochesnost__.pdf. Until November 23, everyone can find out more about the Project on the official ZNU website, in social networks "Vkontakte" and "Facebook" (https://www.facebook.com/ngosmartzp , https://vk.com/ngosmartzp ), on the official pages of ZNU and Project SAIUP at ZNU, as well as send comments and suggestions to mail chesnoZNU@gmail.com.
As part of activities to promote academic integrity and honest education, at the University was held a two-day Debate tournament. Its aim was to find out the level of interest of the student and academic community in the improvement of the quality of education and the expansion of relations between students, teachers and academic community to a whole new ethical and "transparent" level.
The organizers and coordinators of the Debate tournament at ZNU were the Chairman of Zaporizhzhya Branch of Debate Federation in Ukraine Yuliya Yurhina, the delegate from the student community, the coordinator of the project "Honest education" (SAIUP) at ZNU, Oksana Kovtun, as well as members of the tournament jury – representatives of Zaporizhzhya Branch of "Debate Federation of Ukraine", in particular Yevhen Movchan and Olha Harkusha.
The coordinator of the Project from the American Councils for International Education Taras Tymochko also took part in the Debate tournament. He welcomed the participants and pointed out the activity of the student society of ZNU. The guest also stressed that transparency and academic integrity must be an integral part of the educational process, as well as an indicator of positive changes in the education sector. 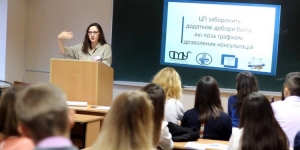 Besides, Taras Tymochko noted that ZNU was the only University in the Zaporizhzhya region, which received a high estimation of the expert of expert of CEDOS analytical center as for the level of transparency (an analysis of the ranking of the University in terms of documents related to the budget of the University, scientific, educational activities, etc). That was why it was selected for the project "Honest education" (SAIUP), which should help to create a whole new level of academic culture – it concerns the quality of academic works, prevention of plagiarism, as well as cooperation in the relationship between student and teacher and really comfortable atmosphere of the educational process for all participants. Therefore, according to the expert, ZNU as a real leader of academic education in the region stands a good chance to join the TOP 10 Ukrainian higher education institutions, and eventually to take a position at the international level.
So, 12 teams took part in the first debate round, which included the students of the faculties and ZNU College of Economics and Law, as well as teachers. The event was traditionally held in the format of British Parliamentary Debate, therefore, the experts assessed not only the significance of the theses, but also specifics of the speakers’ argumentation. Nevertheless, only one team "Plagiarists" (Faculty of Sociology and Management) became a winner of the debate about the academic integrity.
During the next Debate tournament in December the best team will meet with the team of the administration of Zaporizhzhya National University, and will have an opportunity to defend their opinion in dialogue with those who can clear the way for the implementation of the University community’s positive ideas and a number of progressive reforms.