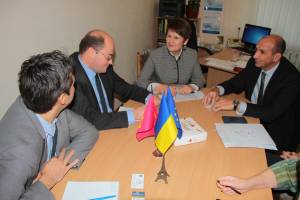 November 21, Zaporizhzhya National University was visited by the representatives of the Embassy of France in Ukraine, the Attaché for university and scientific cooperation Sylvain Rigollet and the Attaché for French language Fabrice Peutot. They were accompanied by the Director of the French Cultural Center "Alliance Française" Lyudmyla Bohdanovska. The honorable guests met with the representatives of the University administration and the Faculty of Foreign Languages, found out more about the material and technical base of the University and its international activities, and also discussed prospects for further cooperation between ZNU and higher education institutions of France.

At the official meeting with the Attaché were present: the Vice-Rector for Research Hennadiy Vasylchuk, the Head of the Department of International Relations Nataliya Kostenko, the Dean of the Faculty of Foreign Languages Halyna Moroshkina and the Chairman of the Department of Romance Philology and Translation Iryna Sharhay.
Hennadiy Vasylchuk assured that at ZNU great importance is attached to the strengthening and development of international relations, in particular its French development. So, 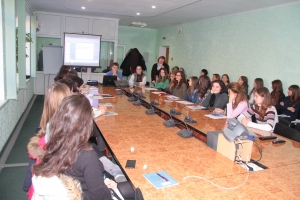 thanks to the initiative of the Dean of the Faculty of Foreign Languages Halyna Moroshkina and significant support of the Rector Mykola Frolov, there is a fruitful cooperation between ZNU and the University of Maine (Université du Maine). It's not only the students of the Faculty of Foreign Languages who study the French language and their teachers, but also representatives of the Faculties of Mathematics, Physics, Biology could participate in this international academic exchange. In particular, for several years there has been an international double degree program, which participants can study simultaneously at master's level at Zaporizhzhya and French universities.
Also the Vice-Rector for Research proposed a new cooperation with foreign higher education institutions: it is possible to open a summer school on the basis of ZNU for students from France who want to study Ukrainian, Russian or other Slavic languages.
The Attachés of the French Embassy in Ukraine favoured the academic international initiatives of ZNU. They found out more about all aspects of learning French at University and promised the full support of its international activities.
In particular, an online conference between ZNU and its constant partner, the University of Maine (France), which on this day was held at the Faculty of Foreign Languages, made a great impression on Sylvain Rigollet and Fabrice Peutot. The guests highly appreciated technical facilities for modern educational process, which were provided for students. They noted the faculty representatives’ level of the French language and their desire to learn more about the linguistic issues that were discussed during the communication with representatives of foreign university.