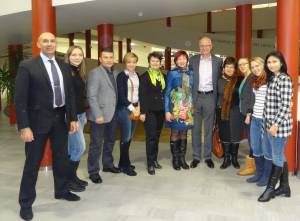 The working delegation of ZNU representatives, which has recently visited the Narva College of the University of Tartu (Estonia) was composed of the Vice-Rector for Research Hennadiy Vasylchuk and the Vice-Rector for Educational Research and Academic Affairs Oleksandr Hura. The Vice-Rectors reported to the administration of Zaporizhzhya National University about the work on the project "Implementation of the multilingual education model and the methodology of simultaneous teaching subject and language (CLIL) at Zaporizhzhya National University and Zaporizhzhya Oblast". In addition, Hennadiy Vasylchuk and Oleksandr Hura presented a number of specific proposals for the project work implementation within the framework of realization of the Concept of foreign languages at ZNU initiated by the Rector Mykola Frolov.

So, they told that for the period of stay in Estonia from 6 to 11 November a number of official and working meetings was held with the administration of the University of Tartu and Estonian teachers. ZNU representatives met with the Dean of the Faculty of Social Sciences, Professor Raul Eamets, the Head of the "Center of Educational 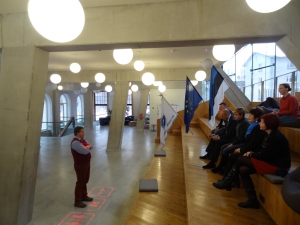 Innovation" Anzori Barkalaja, the Chairman of General Education Department of the Ministry of Education and Science of Estonia Irene Kosar, the Director of general academic school Miina Härma (Tartu) Enna Tanberg, the Director of gymnasia in Jõhvi Tarmo Valhimey. Also, the leadership and the professors of Zaporizhzhya National University communicated with the staff of Narva College: the Director Kristina Kallas, Deputy Director for administration Jaanus Villiko, the Head of "Department of Foreign Languages" Nina Raud, the senior specialist for continuing education Tetyana Babanska and others.
The representatives of Zaporizhzhya University found out more about the organization of the educational process in the above-mentioned educational institutions. In addition, they participated in the analysis of language (foreign) training in Estonia, in particular, a complete linguistic immersion according to the methodology CLIL (Content and Language Integrated Learning). According to the results of the visit to Estonia, the representatives of the administration focused the ZNU leadership’s attention on such possible changes in the educational process of the University: the variety of educational programs, 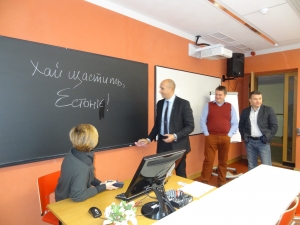 the extension of language training programmes and specializations (for example: the teacher of Ukrainian and foreign languages (English and Russian); the implementation of language training programs for the foreign students. They also propose to conduct a review of programs in the context of practical training improvement (increase in practical training up to 30% of total credit hours).
In addition, the system of subject selection should be improved, in particular, the introduction of "fair" of scientific supervisors through the electronic system of choice, improving feedback to students.
Besides, there will be the extension of career guidance, in particular: free access to the library for students and parents, open lectures for pupils of schools, gymnasiums and their parents (and grandparents).