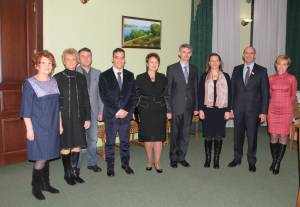 ZNU was visited by the Ambassador of France in Ukraine Isabelle Dumont. She met with the University leadership to discuss further prospects of partnership in education. One of the projects that are planned to implement within the French vector of activities in the next year will be a visit of teacher from France to ZNU for internship. Therefore, students will have an opportunity to learn French with native speaker. 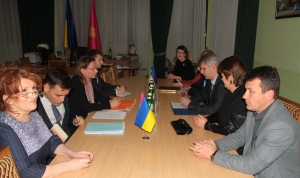 Besides, the Advisor for Culture and Cooperation of the French Embassy Pascal Slivanski also visited the University.
First Vice-Rector of ZNU Oleksandr Bondar noticed that it was a great honour to welcome at our University the Ambassador Extraordinary and Plenipotentiary of France to Ukraine. Teachers and students undertake an internship in France, realize joint scientific projects, and conclude cooperation agreements. In addition, the University also remains the francophone cultural outpost in cooperation with partner agencies in Zaporizhzhya, as the Association "Alliance Française" in our city.
During the conversation with Ambassador Isabelle Dumont, the First Vice-Rector emphasized that the University was interested in development of close relations with France, the expansion of formats of cooperation with universities and Francophone organizations of that country. Today thanks to bilateral cooperation students of ZNU have the opportunity to study at the 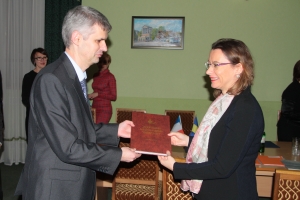 Université du Maine (Le Mans) and get a double degree, and teachers traditionally undertake an internship and give lectures at the partner universities. Besides, Oleksandr Bondar drew attention to the fact that young people's interest in the French language can be confirmed by the positive dynamics of admission to the correspondent specialties and the courses attendance in the Foreign Languages Intensive Study Center of ZNU.
In turn, the Ambassador stressed the importance of ZNU achievements regarding the cooperation with French universities. Also Isabelle Dumont promised that this partnership will only strengthen in the future.
Then, the Ambassador met with the academic staff and students of ZNU.