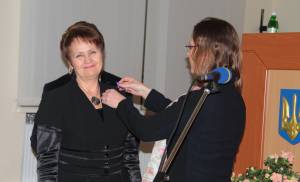 For active promotion and strengthening of relations between Ukraine and France, the work of the Dean of the Faculty of Foreign Languages Halyna Moroshkina was awarded with the Order of Academic Palms, the award of France for merits in the system of education and science. Its informal name is "The Purple Legion", similar to the "Legion of Honour". The Order was presented by Ambassador Extraordinary and Plenipotentiary of France to Ukraine Isabelle Dumont.

The Ambassador noted that it was a great joy for her to perform this important mission in ZNU – to acknowledge the contribution of the Dean of the Faculty of Foreign Languages to the development of Ukrainian-French relations with the order that has been awarded by France for over 200 years. Isabelle Dumont stressed that Halyna Moroshkina had taught at the University for 40 years, at this University she finished studies at her time. Halyna Moroshkina used every visit to France to strengthen the partnership between the two countries. Firstly ZNU worked closely with the educational institutions of Rouen, and then, the partnership was strengthened with the University of Maine (Université du Maine).
The colleagues always look forward to the annual master classes of Halyna Moroshkina on the topics of art in France. The scientific seminars with students in the field of “Linguistics of communication” are also long-awaited.
Thus, today the relations of ZNU with higher education institutions of France are developing mainly 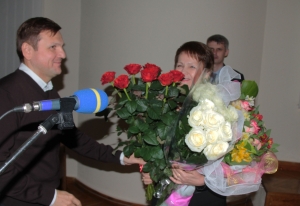 in two directions: francophonie and academic mobility. In addition, students and teachers of ZNU are always ready to expand French relations and the implementation of new initiatives. Recently, the administration of ZNU has considered the prospect of our University’s entry into the Francophone University Association.
The Dean of the Faculty of Foreign Languages Halyna Moroshkina sincerely thanked Isabelle Dumont for the honor to receive that prestigious award. Also Halyna Moroshkina emphasized the strong desire of the faculty’s representatives to continue expanding the scope of cooperation with France.
Then, the Ambassador of France in Ukraine gave a lecture on the prospects of future cooperation between our countries and met with students.
Photo gallery: https://vk.com/album-3183283_239953127