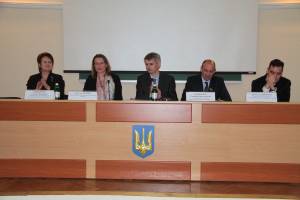 In the framework of the official visit to Zaporizhzhya National University Ambassador of France to Ukraine Isabelle Dumont gave a lecture, in which she outlined the main directions of Ukrainian and French cooperation. The guest of honour drew special attention to the educational aspect: she talked about scholarships for teachers and students, the possibility of internships in France and Canada, Embassy’s help in the study of French with books and electronic sources.

The Ambassador noticed that today the main task of the educational vector of cooperation is support for partnerships between universities, promotion of scholarships for internships for teachers and students, relevant announcements which you can always monitor on the website of the Embassy of France in Ukraine in the category "Science and education" by reference: http://www.ambafrance-ua.org/-Nauka-ta-osviita,264-
The main emphasis of the Ambassador’s speech also referred to the increasing volume of foreign trade in goods and services between Zaporizhzhya region and France during January-September 2016 by $14.29 million, or 63,26% compared to the same period in 2015. Similar growth dynamics related to the export and import of goods and services, goods turnover, foreign trade turnover of services. 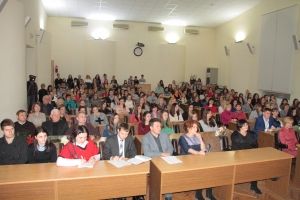 The main exports were: services in the field of telecommunication, computer and information services, processing of material resources. But as for the main import, it was insurance.
Станом на кінець січня 2016 року прямі іноземні інвестиції з Франції в Запорізьку область становили $ 0,04 млн., які на Also Isabelle Dumont introduced her colleague, the Advisor for Culture and Cooperation of the French Embassy Pascal Slivanski.
Besides, the Director of the Association "Alliance française" in Zaporizhzhya Lyudmyla Bohdanovska told about their many cultural projects: the documentary and animated films, concerts, performances in French, language courses, etc. She mentioned that the announcements of these projects can be followed on the official website of the French cultural center by reference: http://afzaporojie.com.ua/
At the end of the lecture the First Vice-Rector of ZNU Oleksandr Bondar thanked the Ambassador of France to Ukraine Isabelle Dumont for the lecture of current interest and also for an opportunity to welcome such a distinguished guest within the walls of Zaporizhzhya National University.
Photo gallery: https://vk.com/album-3183283_239953127