Games of the city championship on basketball among student teams continue 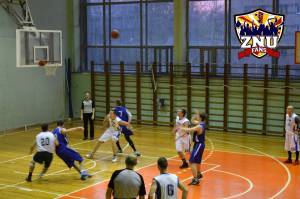 The game of the city championship on basketball among student teams continues on the basis of the sports and recreation complex of Zaporizhzhya National University. This week its seventh tour is held, during which the teams of ZNU and Youth Sports School №12 have met.

Obviously, the game was difficult and tense for basketball players of both teams. However, it came out in favor of ZNU team – 98:73. The sportsmen of the University showed a good result due to the coherence of actions of all team players.
It should be mentioned that ZNU basketball team is coached by the University lecturer Viktor Horbulya. Nine teams from universities and sports institutions of Zaporizhzhya Oblast take part in the competition, which lasts from the beginning of November.
The support group and fans look forward to the final, the eighth round, which will take place on Tuesday, December 13, in the sports complex of ZNTU.