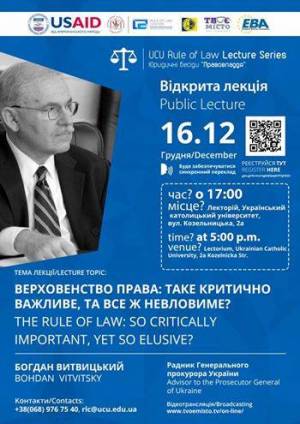 Representatives of the Faculty of Law of Zaporizhzhya National University joined the online broadcast of the public lecture of the Advisor to the Prosecutor General of Ukraine and the U.S. attorney in retirement Bohdan Vitvitsky (USA) on the topic: "The rule of law: so critically important, yet so elusive?". The event was held in the lectorium of the Academic building of the Ukrainian Catholic University. It was a part of a series of lectures UCU "Rule of Law Lecture Series" from leading American lawyers devoted to the actual challenges and problems in the field of consolidation of the rule of law, justice and fairness.

The project is organized by the UCU Rule of Law Center together with the USAID Program to reform the justice sector "New justice" in cooperation with the Ukrainian Bar Association and European Business Association. The lecture was held in English. During the event the participants were provided with the simultaneous interpreting.
The event was attended by representatives of the professional legal environment, academics, law students from leading national universities and all those interested in issues of rule of law and reforming of the legal system in Ukraine.
Law students of ZNU joined this important scientific event thanks to the initiative of the Dean, Professor Tetyana Kolomoyets. The representatives of the faculty always pay great attention to creation of favorable conditions for the future lawyers’ mastering of advanced technology in the field of law. Also they are concerned about the young people’s level of foreign language.
Students of Zaporizhzhya National University described the lecture as very interesting and useful. They thanked the faculty for the opportunity to join the discussion of current legal topics at the international level.